Madrid is seeing if it can bring criminal charges against the speaker of the Catalan parliament for urging the assembly vote for independence. 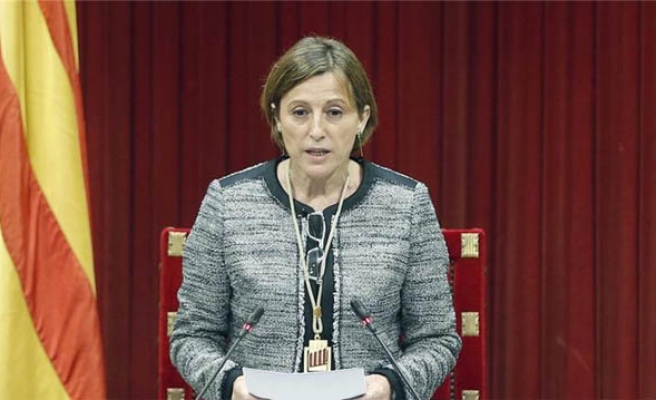 Spain asked the Constitutional Court Friday to nullify a text approved by Catalonia's parliament urging the region to push ahead with its independence drive, warning separatist lawmakers of severe consequences.

The text passed on Wednesday outlines the steps Catalonia -- a northeastern region of 7.5 million people that is divided over splitting from Spain -- needs to take to defend its right to self-determination.

It argues the "only way possible" for Catalans to exercise their right to decide on their future is if the region "disconnects" from the Spanish state and disobeys Spanish institutions.

"It's a violation of our constitution," government spokeswoman Soraya Saenz de Santamaria told reporters in Madrid after a cabinet meeting.

Secessionist parties hold a majority in the 135-seat Catalan parliament, and the text was approved with 72 votes in favour.

Saenz de Santamaria said the government, which has been ruling in a caretaker capacity since inconclusive December and June general elections, had decided to ask the Constitutional Court to declare the text void and suspend it.

She also warned that separatist lawmakers risked fines of up to 30,000 euros ($33,500), suspension from their posts and even legal action if they continued to disobey Madrid.

She said the government had asked the court to evaluate whether Catalonia's parliamentary speaker Carme Forcadell, a stalwart of the region's independence drive, could be criminally liable for allowing the text to be voted through.

Speaking to a Catalan television channel, Forcadell hit back at Madrid's reaction, accusing the government of using legal tools to try and fix something "they do not know how to resolve politically."

"This does not help resolve the problem, it makes it worse," she said.

It suspended an independence referendum called by the Catalan government in 2014 as well as a resolution passed by Catalonia's parliament in November declaring the start of a secession process.

Many in Catalonia, which accounts for nearly a fifth of Spain's economic output and boasts its own language and customs, want more autonomy from Madrid.

Spain's recent economic downturn exacerbated the situation, leaving many resenting the amount of taxes they pay to the central government in Madrid to subsidise poorer regions.