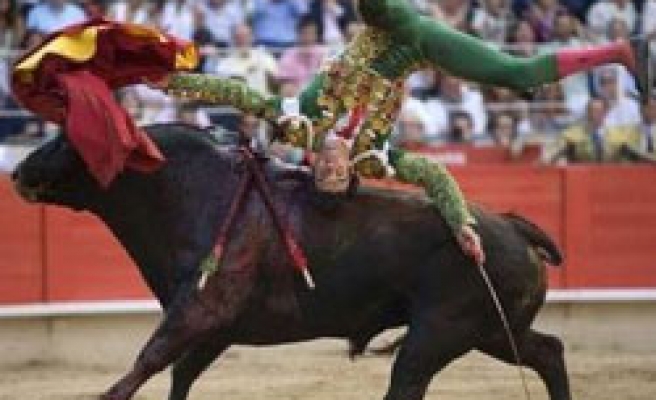 The result of 68 in favour, 55 against the ban was expected, since the Catalonian parliament had cast preliminary votes in December accepting a citizens' petition to stop bullfighting on the grounds that it constituted cruelty to animals.

In the debate, some lawmakers cited the declining popularity of bullfighting in Spain, where fewer people go each year to the arena to watch toreros in their gold "suit of lights" wield red capes and swords at close range against angry bulls.

"There are some traditions that can't remain frozen in time as society changes. We don't have to ban everything, but the most degrading things should be banned," said Josep Rull, member of parliament for the Catalonian nationalist party, or CiU.

Nine lawmakers were abstained from voting in the debate in which animal activists concerned about the suffering of the bull.

Animal rights activists have pledged to spread the ban throughout the country. Anti-bullfighting groups gathered signatures from 180,000 Catalans, which forced parliament to vote on the matter.

"They have heard the outcry of a society that is reinventing its traditions," said Anna Mula, of the group Prou! (Enough!).

Highly ritualised bullfighting, in which the torero and his entourage use capes, lances and darts to subdue the bull and then kill it at close quarters with a sword, was made illegal in Spain's Canary islands in 1991.

Under the ban, which would come into effect in 2012, the last active bullring in Catalonia's capital, Barcelona, would shut down, as would the remaining few elsewhere in the region.