Pedro Sanchez, a telegenic parliamentarian who only burst into the limelight in recent weeks, was elected by party members as the Socialists bid to overturn a dramatic decline. 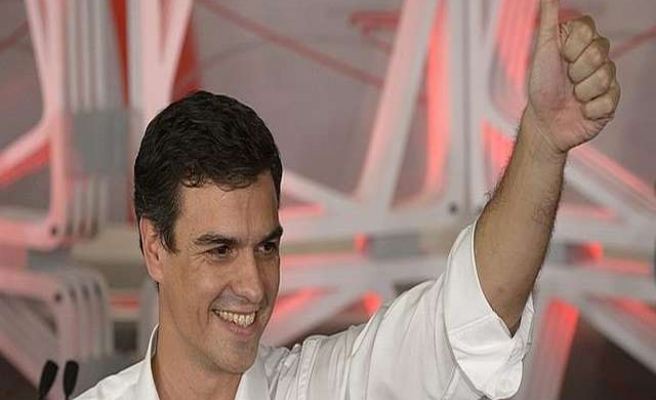 Spain's opposition Socialists, besieged by upstart leftist movements and struggling to win back voters, on Sunday chose economist Pedro Sanchez to lead the party and try and revive its chances in a looming election.

Pedro Sanchez, 42, a telegenic parliamentarian who only burst into the limelight in recent weeks, was elected by party members as the Socialists bid to overturn a dramatic decline.

Support for Spain's two dominant political forces, including the centre-right People's Party (PP) now in power, has plummeted after a six-year economic downturn and corruption scandals.

New anti-austerity and anti-establishment parties tapping into that disenchantment have further fragmented the left, and the Socialists suffered their worst-ever election showing in a European Parliament vote in May, pushing former leader and party veteran Alfredo Perez Rubalcaba, 62, to quit.

Sanchez, who does not have high-level experience in the shadow cabinet or as a regional leader, will have to start rebuilding the party in time for next year's election as a credible challenger to the PP, which beat the Socialists in 2011 with an absolute majority.

After wielding deep cuts in public spending, the PP of Prime Minister Mariano Rajoy was also punished by voters in May, but still came first.

The Socialists have struggled to overcome criticism of how their last government handled the economy when the crisis began, and competition among leftist parties is an additional headache.

"The change of the PSOE (Socialist Party) and the change of Spain started today," Sanchez said, after beating two other candidates by a wide margin. He promised party executives would be "as far left" as its grassroots members.

Madrid-born Sanchez, a married father of two who has also worked in the European Parliament and in Bosnia with the United Nations, has a tough task ahead even in rallying the party faithful.

He called for unity on Sunday, ahead of another leadership contest already looming at the end of this year when the Socialists are due to hold their first open primary vote to choose a candidate for the general election.

A lurch to the left, meanwhile, may not be enough to woo voters back, and some believe the Socialists would do better to try and wrest back more of the middle ground from the PP. That will be a challenge in next year's polls.

"They are still far behind ... and will have to pass through purgatory before getting back to what they once were," said Fernando Vallespin, political scientist at the Autonomous University of Madrid, who added the party had probably permanently lost some votes to newer left-wing parties.

Spain's economy returned to growth in the second half of 2013, but persistently high unemployment, with one in four workers out of a job, means many are not yet feeling the recovery and disillusionment with mainstream parties has grown.

That is starting to shake the dominance of the PP and the Socialists, who have essentially shared power since Spain returned to democracy in the 1970s after the dictatorship of Francisco Franco.

New leftist party Podemos (We Can), which grew out of anti-austerity protest movements and whose leader Pablo Iglesias often takes aim at political elites, was a big winner in the May European elections, taking a surprising 8 percent of the vote.

The People's Party scored 26 percent of the vote, the Socialists 23 percent and a coalition including far-left United Left took 10 percent.

Once their new leader is on board, the Socialists are still set to hold their first open primary vote, expected at the end of 2014, to choose a candidate for the general election.

The party will likely lose no time in trying to rebuild its image, also tarnished by a scandal in the traditional Socialist stronghold of Andalusia in the south of Spain, where it has been accused of skimming jobless benefits.

The Socialists have struggled to gain politically from a party financing scandal that has hurt the PP and its leaders.