'Corruption is killing us,' says Aguirre, a major Spanish political figure, after announcing her resignation as president of Madrid’s Popular Party 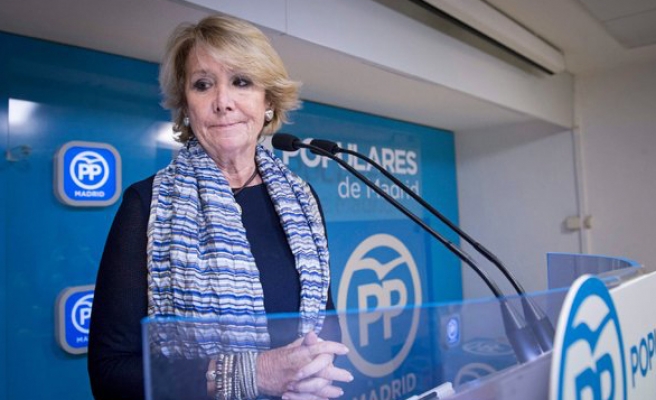 Corruption scandals are taking a toll on Spain’s ruling Popular Party with some now even questioning its ability to govern the country.

Esperanza Aguirre, a major Spanish political figure, announced her resignation as president of Madrid’s Popular Party (PP) late Sunday in the aftermath of a corruption raid.

"Corruption is killing us," Aguirre said, three days after the police raided the Madrid branch of her party in search of evidence for illegal political financing.

The raid was related to the same case that sent Aguirre’s former right hand man, Francisco Granados, to prison for his involvement in an alleged criminal political network.

The network is accused of siphoning off illegal commissions between two and three percent of around €250 million ($280 million) worth of public contracts to corrupt politicians through cooperating business people in Madrid and other Spanish regions.

Aguirre, however, is only the latest political casualty in a series of scandals that has rocked Spain’s ruling PP party.

In late January, Spanish police arrested 24 people, many linked to the conservative PP, in an anti-corruption raid investigating a similar network, which charged illegal commissions for granting public contracts in the eastern region of Valencia. The court is investigating various crimes, including breach of public duties, embezzlement of public funds, influence peddling, bribery and money laundering.

A few PP politicians are also sitting alongside Spanish King Felipe VI’s sister, Princess Cristina, in a historical trial where royalty, politicians and business people are accused of collaborating in a network accused of funneling off around €6.2 million ($6.7 million) of public funds into private accounts.

The Popular Party even made history in January by becoming Spain’s first political party to be officially placed under investigation for its suspected role in destroying evidence on computers and hard disks related to the Barcenas corruption case. In the case, a judge found that the PP had secretly run a slush fund with millions of euros in offshore accounts, which was allegedly used to enrich politicians.

The list goes on and on. Local Spanish media reported that approximately 340 people linked to the PP are under investigation in Spain for corruption in 30 different corruption rings.

Members of other political parties, including the Socialist Party (PSOE), which is the only other party to have governed Spain, have also been accused and convicted.

According to a recently released Transparency International report, Spain is ranked 36 globally in the Corruptions Perceptions Index, down two points from last year.

In Western Europe, Spain is perceived to be the second most corrupt country, trailing only behind Italy. Spain’s 2015 corruption perception index was the country’s poorest ranking in two decades and has fallen 16 places since it was ranked 20th in 2002.