Seeking to reassure Spaniards, he added: "The government will ensure that any declaration of independence will lead to nothing." 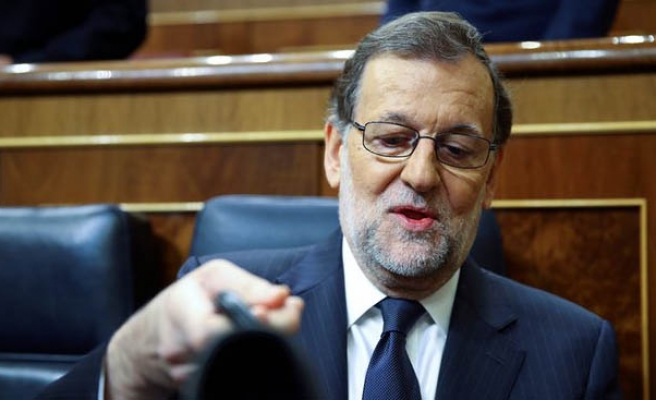 Spanish Prime Minister Mariano Rajoy has refused to rule out suspending Catalonia's regional autonomy unless its leaders withdraw a threatened declaration of independence as tens of thousands rallied for national unity.

"I don't rule out anything," Rajoy said in an interview with the daily newspaper El Pais published Sunday when asked about applying the constitutional provision that allows the suspension of autonomy and the imposition of direct rule from Madrid.

"But I must do things at the proper time... I would like the threat of an independence declaration to be withdrawn as quickly as possible."

He also urged moderate Catalan nationalists to distance themselves from the "radicals" in the separatist camp who are pushing hardest for an independence move.

He spoke after tens of thousands of demonstrators rallied across Spain on Saturday calling for Spanish unity and demanding action to resolve the volatile political crisis.

Protesters dressed in white gathered in front of town halls in dozens of cities to demand dialogue to end the crisis in demonstrations organised by a group called "Let's Talk".

"I am sad to see the state in which we find our country and the mediocrity of our government," said Marte Muro, 67, at the rally in Madrid, which drew several thousand people.

In Barcelona thousands packed Sant Jaume square in front of city hall as tension reigned with no solution in sight to Spain's worst political crisis in a generation.

They held up signs with the word "parlem" -- Catalan for "let's talk" -- and waved white handkerchiefs but not flags.

Similar rallies were held in Bilbao, Zaragoza, Valladolid and other cities under the slogan: "Spain is better than its leaders".

But in Madrid, parallel to the "Let's Talk" march, some 50,000 people according to Spain's central government gathered in Colon Square beneath an enormous Spanish flag for a "patriotic" march organised by activists to defend unity.

"Rajoy, you asshole, defend the nation!" chanted one group of demonstrators as they marched into Colon Square waving Spanish flags as well as one bearing the Franco-era black eagle.

Separate from that group, Octavi Puig, a retired Catalan who lives in Madrid, said he came to the protest because he did not want a "Berlin wall" to separate him from the graves of his loved ones and his family in Catalonia.