After the accident, his face covered in blood from a head wound, Garzon spoke with both the train system control centre and emergency dispatchers. 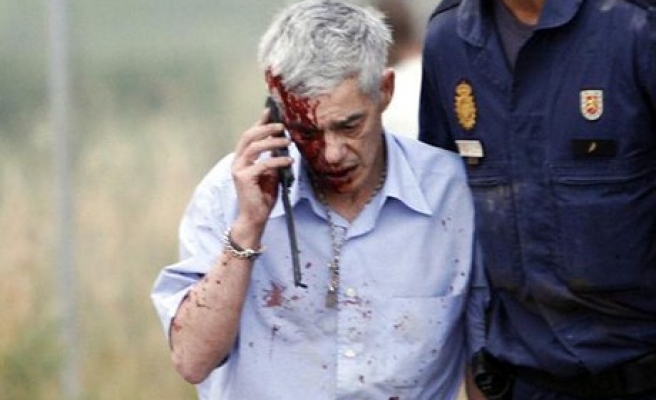 The driver of a Spanish train that derailed at high speed was due to be questioned by a judge on Sunday as officials try to determine to what degree he was responsible for the deaths of 78 people in the accident.

Francisco Garzon, 52, has been held by police on suspicion of reckless homicide, but has yet to be formally charged by a magistrate or to make any official statement.

The experienced driver was travelling at more than twice the 80 km per hour permitted on a curve going into the city of Santiago when the train careered off the track and smashed into a wall.

On Sunday all of the dead in the accident had been identified and 71 people were still hospitalised with injuries from the crash, which crumpled the train and set some of carriages on fire. Of those, 31 were in critical condition.

After the accident, his face covered in blood from a head wound, Garzon spoke with both the train system control centre and emergency dispatchers. Spanish newspapers have reported that transcripts of those communications show that he recognised he was going too fast.

He was released from hospital on Saturday but remained in police custody. Neither lawyers nor members of Garzon's family could be contacted for comment.

The Alvia train, one of three types of high speed train services that run in Spain, received a full maintenance check on the morning of the journey, the head of state train company RENFE said, and security systems in place were in good shape.

"As far as we know the train was in perfect condition when it set off on its journey," Julio Gomez-Pomar told newspaper ABC.

The Alvia trains run both on traditional tracks, where drivers must heed warning systems to reduce speed, and on high-speed tracks where a more sophisticated security system will automatically slow down trains that are going too fast.

At the section of the track where the accident happened, it was up to the driver to respond to prompts to slow down.

But Gomez-Pomar rejected criticism that the safety system was insufficient, saying the debate "does not make much sense".

On Sunday, pilgrims and passers-by continued to pay homage to the victims, placing flowers and candles at the gates of Santiago's centuries-old cathedral as the city prepared for an official funeral on Monday, to be attended by Prime Minister Mariano Rajoy.

Santiago was meant to be celebrating the yearly festival of St. James on July 25, with thousands of Christian pilgrims arriving after walking the famous Camino de Santiago ancient pilgrimage trail. Festivities were cancelled after the accident on the eve of the Saint's day.

Some pilgrims left walking sticks from their journeys and others placed shells, the symbol of St. James and badge of honour for the pilgrims who complete the journey, along the gates.

Dolores Mato, 57, a shopkeeper close to the ancient cathedral in Santiago, expressed sympathy and grief for the victims and their families, but also for Garzon, who she said had been "crucified" in the media.

"I really think something must have gone wrong on that train. It couldn't have been only his fault," she said.

Some columnists have focused on the deficient security system at that point in the track.

"Technical experts ... note that on that section of the track, speed depends only and exclusively on the driver," conservative newspaper La Vanguardia said in an editorial.

"It is clear that high speed railways cannot depend exclusively on the professionalism of the driver and the ever-present possibility of human error."

On Saturday the head of the Galician regional government, of which Santiago is the capital, said the accident was being used as an excuse to criticise AVE capabilities.

Train drivers union SEMAF say the treatment of Garzon at this early stage in the investigation has been inappropriate.

"(The police) are using information which hasn't been checked, without having the official version, to arrest this man. You can't take someone away in handcuffs like that, it leaves a great deal to be desired," said Santiago Pino, spokesman for train drivers union SEMAF.