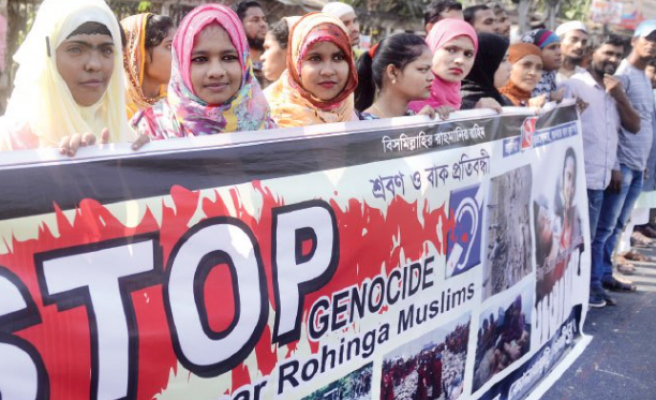 More than 100 people gathered in Stockholm on Tuesday to protest against the ongoing persecution of Rohingya Muslims in Myanmar’s western Rakhine State.

The Rohingya Support Committee had organized the demonstration at Sergels Torg Square.

“Stop the genocide in Myanmar”, “Stop killing Muslims in Arakan” and “Stop Rohingya Genocide’’ were some slogans chanted at the protest.

Demonstrators also requested the withdrawal of the Nobel Peace Prize given to the Myanmar’s Aung San Suu Kyi in 1990.

Kalam also expressed satisfaction with the activities of the Turkish Cooperation and Coordination Agency (TIKA) in Myanmar.

“We are thankful to Turkey and Turkish president who showed us humanity and sympathy.”

Swedish Foreign Minister Margot Wallström, who was in Bangladesh and Myanmar last week, said over 600,000 Rohingya Muslims have been subjected to violence and harassment since August.

The European Rohingya Council has described the situation as a “slow-burning genocide”. However, it has gained pace after Aug. 25. There are almost no Muslims left in Rohingya Muslims' historic homeland of Rakhine.

A crackdown launched on Aug. 25 has seen more that 620,000 Rohingya cross from Rakhine into Bangladesh, according to the UN.

The refugees are fleeing a military operation that has seen security forces and Buddhist mobs kill men, women and children, loot homes and torch Rohingya villages.

UN investigators said such violations may have constituted crimes against humanity.