Summit on Ukraine to be held in Oct.

Another round of talks over situation in Donbas featuring Hollande, Merkel, Poroshenko & Putin would take place in Paris on October 2 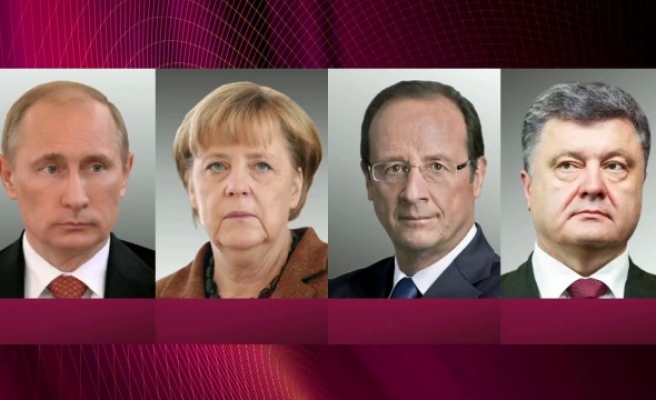 The leaders of France, Germany, Russia and Ukraine on Wednesday agreed to hold an October summit on ending the conflict in Ukraine, as they welcomed reports that a truce in the east had been "generally respected since September 1", the French presidency said.

In a phone conversation that lasted for 90 minutes, Francois Hollande, Angela Merkel, Vladimir Putin and Petro Poroshenko said everything must be done "to make this situation last and allow the OSCE special observer mission to have permanent, safe and unrestricted access" to the affected areas, the Elysee statement said.

While the Elysee Palace said the four leaders would meet in "early October" to hold talks on resolving the Ukraine conflict, the Kremlin said in its own statement issued after the phone call that the summit would take place in Paris in October 2.

Foreign ministers from the four countries will meet in Berlin on Saturday to come up with "concrete proposals" ahead of the summit, the Elysee added.

Ukraine's army said earlier Wednesday that a new nine-day truce with pro-Russian rebels was holding despite small skirmishes that claimed the lives of two government soldiers this week.

The Kremlin confirmed that the four leaders had welcomed efforts to maintain the ceasefire in eastern Ukraine and stressed the need for the withdrawal of heavy weaponry from the frontlines.

"A withdrawal of armoured vehicles, mortars with a caliber of up to 120 mm and artillery guns with a caliber up to 100 mm along the entire line of contact would facilitate the tasks of de-escalating the situation further and creating pre-conditions for the economic revival of the affected Donbass regions," the statement said.

"Hope was expressed that a relevant agreement would be agreed upon and put together very soon," the statement added.

The Kremlin also said that the leaders had discussed several provisions of the Minsk peace agreement, including the holding of local elections in separatist areas -- an increasingly contentious issue.

Under the agreements signed in the capital of Belarus in February, the separatist regions must conduct local elections by the end of the year "in accordance with Ukrainian legislation and the law of Ukraine".

The rebels, however, want to hold local elections on their own terms, which include barring all pro-Ukrainian candidates and holding the polls on days that do not correspond to local elections planned in the rest of Ukraine on October 25.

Ukrainian Prime Minister Arseniy Yatsenyuk warned Wednesday that any attempt to hold "unlawful" elections in rebel-run areas in the country's east would constitute a breach of a February peace deal.

The United Nations estimates that the 17-month conflict on the European Union's eastern frontier has claimed the lives of nearly 8,000 people and injured almost 18,000 -- most of them civilians.

Russia denies accusations by Ukraine and its allies of orchestrating and supporting the conflict to try to prevent Ukraine from joining the European Union and possibly NATO at a later date.