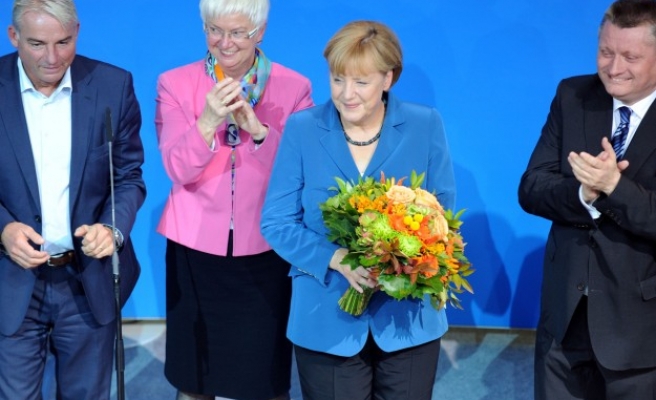 Merkel's coalition partner Free Democratic Party (FDP) braces for the worst election results in party history as it stands at 0.3 percent below the 5 percent threshold, losing nearly ten percent since last elections and faced with the danger of being left out of the federal assembly for the first time.

Main opposition Social Democratic Party (SPD) head Sigmar Gabriel congratulated Merkel for what appeared to be a decisive victory, adding that SPD for its part increased its votes but the results were nonetheless behind expectations.

FDP’s failure to cross the 5 percent threshold strengthens the widely discussed “Grand Coalition” scenario between the conservative CDU/CSU and the Social Democratic Party, provided that CDU/CSU bloc fails to get absolute majority.

The turnout rate is reported to be at 76 percent, four percentage points higher than the last elections in 2009.

Andrea Nahles, the general secretary of the main opposition Social Democrats (SPD), told ARD television on Sunday night that her party would first discuss the possible scenarios on Monday.

“Everything remains open,” she said, “Nothing will be decided tonight.”

Meanwhile, the anti-euro Alternative fur Deutschland (AfD) party remains right below the threshold at 4.9%, while the Greens get 8% and the Left 8.5%.