Danish police found no explosives in a suspect package left at the scene of a deadly shooting attack on a cafe hosting a free speech event on Saturday, police said in a twitter message on Tuesday. 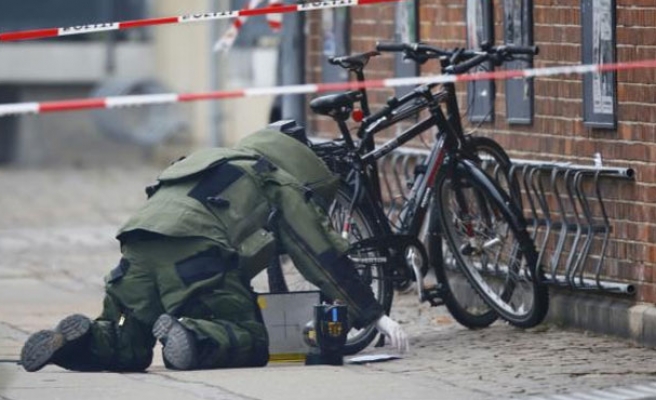 A suspect package has been found outside a cafe in Copenhagen, the scene of an attack during a free speech event on Saturday, and the area has been evacuated, police there told a television reporter on Tuesday.

The suspected gunman in that attack and another on a synagogue was shot dead on Sunday but Copenhagen has been on high alert since and two people were arrested on Monday, accused of helping the attacker.

Sniffer dogs and about 25-30 police officers were present at the cafe while vans with more officers were arriving, the TV reporter said. They were waiting for a bomb disposal team, police told the witness.

A 22-year-old gunman opened fire on a cafe hosting a free speech debate on Saturday, killing one. He then attacked the synagogue, killing a guard. The shootings sent shockwaves through the country, proud of its open society.

Police later shot dead the man suspected of the killings in a shootout in his neighborhood of Norrebro, a largely immigrant part of the city with a reputation for gang violence.

Police have still not named the shooter but media outlets have widely reported that he was Omar Abdel Hamid El-Hussein, a son of Palestinian immigrants known to the police due to his weapons violations, an assault conviction and membership of a gang.

On Monday, police confirmed that the shooter visited an internet cafe where later they detained the two men accused of aiding him.