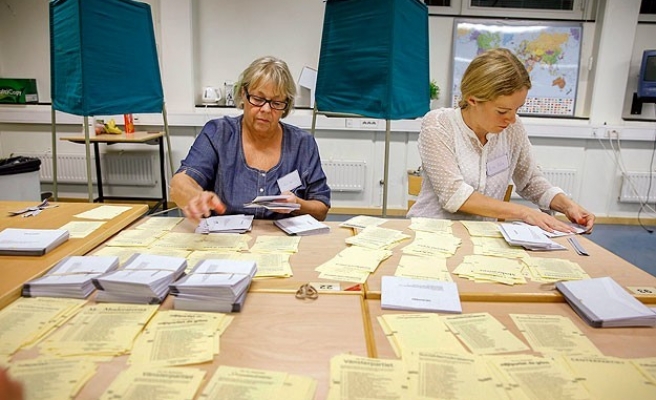 Shrugging off scandal and condemnation from their political rivals, the far right Sweden Democrats have more than doubled their vote to hold the balance of power in their country - cementing immigration worries into mainstream political debate.

Such success for a party that included neo-Nazi supporters among its founders and wants immigration to be slashed by 90 percent has shocked people in Sweden who hitherto preferred to think of their country as the "humanitarian superpower" described by Prime Minister Fredrik Reinfeldt.

That humanitarian generosity however has fed the rise of the far-right. Costs for asylum seekers including housing, language lessons and a welfare allowance totalled 1.5 percent of the country's budget in 2013, the same year in which Sweden offered automatic residency to all refugees from the war in Syria.

An estimated 80,000 asylum seekers will arrive this year, the highest since the Balkan Wars of the 1990s.

That influx, combined with a recent warning from Reinfeldt that the huge cost of new arrivals would strain public finances, played into voters' fears that one of the world's most generous welfare states may no longer be so affordable.

Minutes after Reinfeldt's warning, Jimmie Akesson - the suit-wearing leader of the Sweden Democrats who has worked to build an air of respectability around the party in recent years tweeted: "The Prime Minister has confirmed it - the election is a choice between mass immigration and welfare."

Sweden joins countries across Western Europe where parties opposed to immigration have become a force to be reckoned with: In Denmark, an anti-immigrant party won 27 percent of the vote in EU election to become the biggest single party.

The Sweden Democrats' ascent creates a big headache for incoming Prime Minister, Social Democrat leader Stefan Lofven, as he seeks to cobble together a minority cabinet stable enough to survive while at the same time isolate the far-right.

"It looks like 13 percent of the electorate think welfare is more important than asylum immigration. That is not bad considering where we started from," he said.

Under the tight reign of Akesson, 35, the Sweden Democrats have distanced themselves from their extremist roots, reshaping their image as one of a mainstream party seeking to affect change from within.

Their leader, who wears business suits and dark-rimmed spectacles, has exorcised from his party a stream of members who failed to stay clear of making racist remarks. Unlike some party brethren, Akesson has rarely been linked with harsh rhetoric and has appeared in public with immigrants.

"The Sweden Democrats have adapted their rhetoric so that these people can be comfortable voting for the Sweden Democrats without feeling too extreme," said Daniel Poohl, editor-in-chief at Expo magazine, a magazine that probes right-wing extremism.

Even a string of scandals, including one where leading Sweden Democrats were caught on film making racist slurs and wielding a metal pipe in a Stockholm street, has done nothing to dim the appeal of a party once on the fringe of politics.

"It used to be what you call white, angry, young men in the countryside," Magnus Hagevi, a political scientist at Linnaeus University, said of the Sweden Democrats' supporter base.

"But it is increasingly more a cross section of the Swedish population. It's not that different from other parties anymore."

Nonetheless some Swedes expressed disbelief as they took in the election result.

"I'm actually a bit shocked that the Sweden Democrats got so many votes," said Josefine Merlo, a young commuter passing through Stockholm's central station on her way to work. "I can't understand because nobody I know actually supports them."

Since Akesson led the Sweden Democrats to their first parliament seats with 5.7 percent of the vote in 2010, the party has kept a relatively low profile, though uncomfortable fellow parliamentarians see it as the elephant in the Riksdag.

Having won 12.9 percent on Sunday, that elephant just got much bigger. And as the scope of the gains became clear, Linus Bylund, Akesson's right-hand man, said the party could now afford to become more assertive.

"In 2010 we were especially focused on showing we were not a bunch of clowns," he said. "We'll probably be less intent on tip-toeing around now."

That's bad news for Lofven whose own party and its allies made only modest gains and indeed won the election only because voters quit Reinfeldt's centre-right for the Sweden Democrats.

"Unless there's a very broad government, they can torpedo a new cabinet in every vote," Gothenburg University Professor Peter Esaiasson said of Akesson's party.

"If they want to, they can create a real ruckus."

But the inroads by the far right may galvanise other parties to fend them off and increase the possibility of cross-aisle agreement - not least on safe-guarding a continued generous asylum policy.

"We must respect their voters but they have no right to be king makers," Lofven said of the Sweden Democrats. "Remember that 87 percent of the Swedes didn't vote for them."