UN envoy Staffan de Mistura says 'good reason' to believe opposition will join peace negotiations however the opposition have said that they will not travel to Geneva unless discussion of humanitarian issues takes place before political ones. 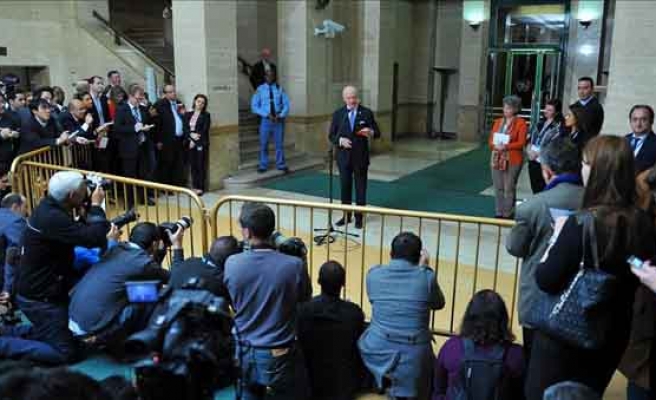 The Geneva peace talks on Syria that began Friday are likely to be joined by the opposition delegation on Sunday, the UN’s envoy said.

The main opposition however said it wanted to discuss humanitarian issues before engaging in political negotiations.

A member of the group, known as the Higher Negotiating Committee (HNC), Farah Atassi, said that the delegation is coming "not to negotiate" with the government yet, but to talk to UN officials after receiving reassurances from the organisation reports Al Jazeera.

HNC spokesman Monzer Makhous said that the delegates from the  opposition had not changed a previous position where they stated they would not travel to Switzerland if specific conditions for talking were not met.

"Yes, we will go to Geneva to be present but we will not attend the talks at all unless the regime fulfils our humanitarian demands, which specify stoppage to bombings and starvation of civilians in besieged areas as a condition," Makhous said.

The Saudi-backed opposition group failed to take part Friday due to a lack of assurances from the UN on the ending of airstrikes by the Syrian regime and Russian forces and the lifting of sieges.

“On probably Sunday we actually start the discussion with them in order to progress intra-Syria talks,” de Mistura said.

He added that the UN team considered Monday an “important day to reassess the situation”.

Speaking at a news conference following talks with delegates representing President Bashar al-Assad’s government, de Mistura said a cease-fire, which would allow humanitarian aid to access besieged towns, was “obviously something that we are aiming at”.

He added: “For us it is very important to have an indication about where we are on the presence of the HNC.”

Noting the committee’s concerns, he said UN officials had been “strongly suggesting to them [that] the best way actually to discuss the implementation of such improvements has to be done here with us.”

The Geneva conference aims to focus on setting up an interim government, forming a constitution and staging elections within two years. The initial priorities are to establish a cease-fire, supply humanitarian aid and tackle ISIL.

The Turkish Foreign Ministry's director general for the Middle East, Can Dizdar, will be in Geneva to follow the negotiations.

The conflict has been raging since early 2011 and has led to the deaths of more than 250,000 people and driven more than 10 million from their homes, according to the UN.