Children and women among hundreds of demonstrators in Greek capital 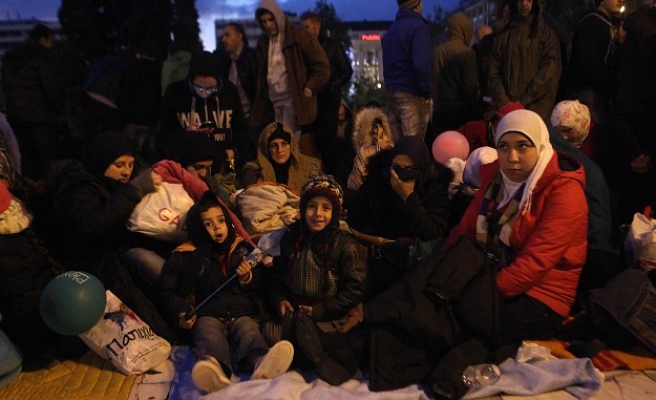 About 500 Syrian refugees including women and children have staged their sixth day of a hunger strike in front of Greece's Parliament House in Athens.

The hunger-strikers, who reached Greece from Turkey in inflatable boats, called on the Greek government to observe their rights as refugees and held placards reading: "We escaped from death in Syria to vagrancy in Greece."

Khalsa, a 40-year-old woman who had been Greece for almost two months, told Anadolu Agency on Monday: “We are seeking asylum and some decent treatment. My four children and and husband are still in Syria."

She said she had lost all contact with her family since she had arrived in Athens.

Refaat, another Syrian refugee who had been in Greece for four months, said: "We faced problems on our way here, but the Greek authorities treated us well in order for us to arrive safely."

But he said the government needed to listen to them and take into consideration their rights as refugees.

"We want the Greek government to give us passports in order for us to be able to leave," he said.

One hunger-striker, a 70-year-old man, was taken to hospital after he fainted because of low temperature and a lack of food, health officials said.

The refugees said they would continue their silent demonstration until their demands were heard by Greek officials.