Crimean Tatars are heard making calls of 'Allahu Akbar' (God is great) on the streets of Crimea as they protest what they perceive to be attempts by the majority ethnic Russian population to cede the autonomous Ukrainian peninsula to Russia. 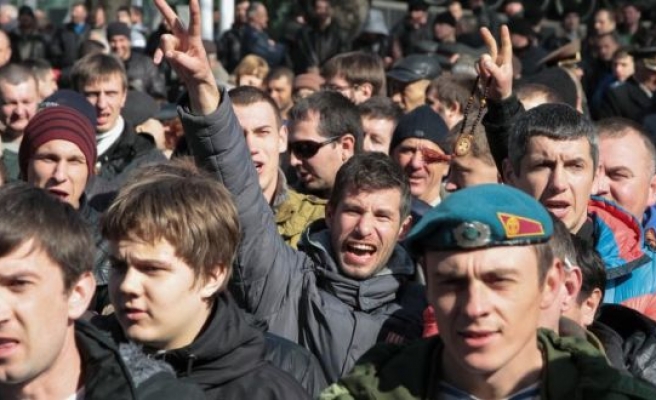 Crimean Tatars are heard making calls of 'Allahu Akbar' (God is great) on the streets of Crimea as they protest what they perceive to be attempts by the majority ethnic Russian population to cede the autonomous Ukrainian peninsula to Russia.

Thousands of pro-Russia separatists and supporters of Ukraine's new leaders confronted each other on Wednesday outside Crimea's regional parliament before a debate on the political upheaval that swept away President Viktor Yanukovich.

About 2,000 people, many of them ethnic Tatars who are the indigenous group on the Black Sea peninsula, converged on the parliament building to support the 'Euro-Maidan' movement which overturned Yanukovich in Kiev after three months of protests.

They were met by a similar number of pro-Russia demonstrators who bellowed loyalty to Moscow and denounced the "bandits" who had seized power in the Ukrainian capital.

The two sides, who were held apart by police lines, rallied in a noisy cacophony outside the parliament which, under pressure from pro-Russia forces, had called an emergency session for later on Wednesday to discuss the crisis.

Crimea was transferred from Russia to Ukraine in 1954 in the Soviet-era by then Soviet leader Nikita Khrushchev. With a part of Russia's Black Sea fleet based in the port of Sevastopol, it is the only region of Ukraine where ethnic Russians dominate in numbers, although many ethnic Ukrainians in other eastern areas speak Russian as their first language.

With Crimea now the last big bastion of opposition to the new post-Yanukovich political order in Kiev, Ukraine's new leaders are voicing alarm over signs of separatism there.

Ethnic Tatars, who accounted for most of the pro-Maidan demonstrators, rallied under a pale-blue flag, shouting: "Ukraine! Ukraine!" and the Maidan's refrain of "down with the gang!"

The pro-Russian crowds, some of them cossacks in silk and lambswool hats, shouted back "Crimea is Russian!".

More pro-Russia loyalists were brought in by bus from other parts of the peninsula and soon outnumbered the crowds of Tatars and 'EuroMaidan' supporters. They began playing Russian songs and religious choral music from amplifiers set up in the portico of a church.

One person died, probably from a heart attack, as a large crowd of people protested on Wednesday outside the Crimean regional parliament in Ukraine, Interfax news agency reported.

Tension over Crimea is likely to escalate further on Wednesday after President Vladimir Putin put Russian troops on high alert for a drill. Since Yanukovich's downfall, all eyes have been on Putin, who in 2008 ordered an invasion of Georgia to protect self-declared independent regions with many ethnic Russians, which he then recognised as independent states.

Rudik Asmanov, a 42-year-old Tatar businessman, said: "We need to show our support for Kiev, to honour 'Heaven's Hundred'," he said, referring to casualties on the protesters' side in Kiev.

Alexei, 17, part of the pro-Russia crowd, who was wearing a bandana over his face and carrying a baseball bat in a backpack, said: "The Tatars are our enemy now. They're siding with the bandits in Kiev. We need to defend ourselves or it will be chaos."

The Tatars, a Turkic ethnic group, were victimised by Soviet dictator Josef Stalin in World War Two and deported en masse to Soviet Central Asia in 1944 on suspicion of collaborating with Nazi Germany.

Tens of thousands of them returned to their homeland after Ukraine gained independence with the collapse of the Soviet Union at the end of 1991.

Tatar leader Refat Chubarov, who came to address the crowd but was shouted down by pro-Russians supporters, told Reuters: "We have a long memory of what the Russians did to us Tatars.

"We are now a minority in our own homeland because of them ... We have fought alongside the Ukrainians more often than against them - our loyalty is with them," he said.

After meeting with Crimean parliament speaker Vladimir Konstantinov, the Tatar leader called for patience and told his people to go home, saying "The parliament speaker fears the minority and will not conduct the vote to join with Russia. They will make a decision tomorrow and have promised to include the Crimean Tatar people in the decision-making process."

The Holland-based Western Europe Crimean Tatar Solidarity and Cultural Center called on Turkey and Europe to stand with the Crimean Tatars amid raised tensions in the peninsula.

In an official statement, the organization, which represents the Crimean Tatar Turkish diaspora in western Europe, said the Crimean parliament would have committed a 'crime against humanity' if it decided to join Russia, and would be responsible for a lot of bloodshed.

'We do not want a repeat of May 18, 1944', the statement said, referring to the Soviet-led forced exile of Crimean Tatars from their native homeland.

The organization's Turkey branch also expressed concern, saying “The declarations of the chairman of the Supreme Council of Crimea, which is the main impediment in the way of the Crimean Tatars to protect their culture and civilization since their turning back to their homeland in 1991 after the deportation of 1944, May 18, and some council members in favor of the independence of Crimea and their open invitations to Russian Federation as a guarantor of this situation, make the Crimean Tatar diaspora very anxious about the situation”.

“Probable harmful consequences of irrational demands of the authorities of Supreme Council of the Crimea over Crimean Tatars, whose only desire is to live in their homeland in a peaceful, easy society according to the principles of human rights, are unacceptable for Crimean Tatar diaspora,” the statement added.

“It should not be forgotten that Crimean Tatar diaspora will not hesitate to use all means which are accepted by international and domestic law to support their people if a threat emerges against the Crimean Tatar people in Crimea,” the statement continued, before calling for a democratic solution to end the crisis.