Workers express anger over center-right government's cuts in spending on healthcare and delays to indexation of wages in relation to prices. 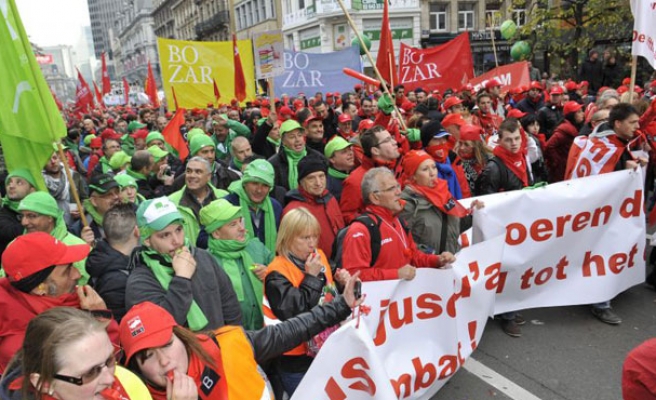 About 10,000 people have gathered in the Belgian capital of Brussels to protest against the center-right government’s "austerity" measures.

Workers and labor unions said on Wednesday they had been angered by austerity measures being imposed by Belgium’s new center-right government, which include a two-year extension to the age of retirement, cuts in spending on healthcare and delays to the indexation of wages in relation to prices.

Between 8,000 and 10,000 people attended the demonstration, local media reported, where protesters held banners reading "No Poverty" and fired smoke flares at a square in central Brussels.

"The plan is the answer we need to confront the main handicap of the European economy - the lack of investment," Moscovici said.

However, the heavily trailed €315 billion investment plan, presented by EU Commission chief Jean-Claude Juncker last November, was widely criticized at the time after it was disclosed that only €21 billion of money was actually available - reallocated from existing funds.

Juncker said in November the European Fund for Strategic Investment (EFSI) was based on reallocating funds and luring private investors into the scheme instead of taking on new debt in an effort to revive the struggling EU economy.

He said the three-year scheme, starting in June 2015, would use public "seed money" of €21 billion, with the EU financing €16 billion from its budget and the European Investment Bank (EIB) providing the remaining €5 billion.

It is understood the "seed money" would come in the form of guarantees to be used to raise private funding for investment in higher-risk projects valued at the estimated €315 billion.