Thousands of refugees pour into Austria 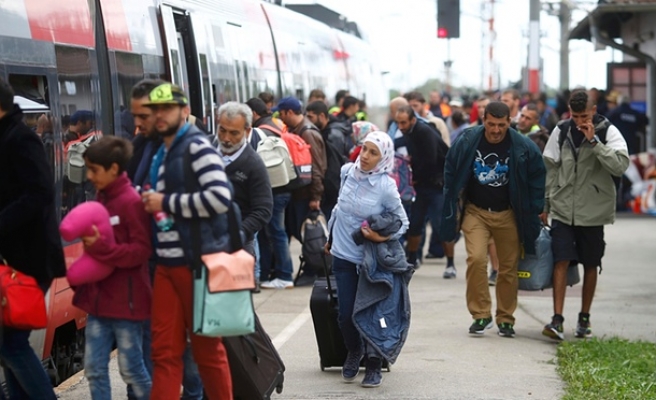 Crowded aboard buses and trains, thousands more refugees flooded into Austria on Sunday from countries unable or unwilling to cope with a desperate human tide escaping war and poverty for a better life in western Europe.

And new tragedy struck for those fleeing by sea when at least 13 refugees including four children died off the coast of Turkey after the inflatable dinghy carrying them to Greece collided with a ferry, Turkish media reported.

As several thousand more refugees arrived Sunday in Austria from Hungary via Croatia, Budapest abruptly decided to reopen a border crossing with Serbia whose closure on Monday had sparked a surge of refugees into Croatia.

The Horgos-Roszke 1 crossing is on the highway that before the refugee crisis engulfing Europe was the main route linking Belgrade and Budapest.

The closure added distance and uncertainty for thousands undertaking the gruelling journey across the Balkans into western Europe, with Croatia saying 25,000 had entered its territory in the past four days.

Within days of the border closure, Croatia said it could not cope with the flow and began to redirect the refugees back toward Hungary or toward Slovenia.

Croatia, Hungary and Slovenia are all EU members, but only the latter two belong to the passport-free Schengen zone.

The bulk of the refugees are fleeing the war in Syria, with the European Union receiving almost a quarter of a million asylum requests from April through June.

Germany alone expects up to a million asylum seekers this year.

On a train stopped at the Hungarian border town of Gyekenyes, across from northeastern Croatia, Ali Al-Mahmody waited with his wife and seven-month-old baby.

"All I want is to see my little baby boy grow up," the 59-year-old from Baghdad, who was imprisoned under Saddam Hussein, told AFP.

The family left Iraq about a month ago, and craves sleep, he said.

"We slept in forests in Macedonia. We can tolerate the hunger, but we just want to sleep."

The continent's biggest migratory flow since the end of World War II has caused a deep rift between western and eastern EU members over how to distribute the refugees.

The crisis has raised questions over the fate of the Schengen agreement allowing borderless travel across most countries within the 28-nation bloc, with several of them imposing border controls.

Hungary's right-wing government in particular has faced international criticism over violent clashes with refugees and a hastily erected fence along its border with Serbia.

The Hungarian authorities began transporting thousands of refugees straight to the border with Austria on Friday in an apparent bid to move them through and out of their territory as quickly as possible.

But despite heated rhetoric between Budapest and Zagreb, authorities on both sides are showing high levels of cooperation on the ground.

AFP correspondents reported that on Saturday and into the night, around 15 Croatian buses brought hundreds of refugees to Baranjsko Petrovo Selo, who crossed on foot to Beremend, in Hungary, where Hungarian buses were waiting for them.

Early Sunday, several waiting buses could be seen on the Hungarian side and Croatian radio said several buses were headed towards Beremend.

And around 1,000 refugees on Saturday boarded a train in Tovranik, in the far east of Croatia, travelling to a stop near the Hungarian town of Letenye, which they could reach on foot.

In Sunday's accident off the Turkish coast, the boat was carrying 46 refugees from northwestern Turkey to Lesbos, one of the Greek islands that has seen a heavy influx of refugees from war-torn Syria via Turkey.

A survivor whose name was given as Haseen told Greek state news agency ANA: "It was dark, we saw the ship bearing down on us. We tried to signal with flashlights and cellphones but they did not see us."

Thrown overboard, the passengers fought to keep their heads above water. "We lost the children. We could not see them in the dark," Haseen said.

More than 2,600 people have died among the nearly half a million who have braved perilous trips across the Mediterranean to reach Europe so far this year.

The Italian navy said it was carrying out two operations on Sunday, rescuing nearly 250 refugees off the Libyan coast after picking up more than 4,500 on Saturday.

And the Libyan coastguard said it rescued 215 refugees Sunday from two boats in the Mediterranean including more than 50 women.

Many refugees have turned to Turkey's land borders with Greece and Bulgaria to avoid the sea voyage.

Altogether, Greece has seen more than 300,000 refugees enter the country this year, most of them passing through to other European countries.

EU interior ministers are to meet again on Tuesday, followed by an emergency summit on Wednesday.

EU Enlargement Commissioner Johannes Hahn said the bloc was earmarking aid of "up to one billion euros" ($1.13 billion) to encourage Syrian refugees in Turkey to stay there.

Of the more than four million Syrians who have fled their country, nearly half have sought shelter in Turkey, while more than a million are now living in Lebanon and at least 600,000 in Jordan.