Scores of of people marched in London, Athens, Barcelona, Vienna, Amsterdam and several Swiss cities a day after EU-Turkey refugee deal has been agreed 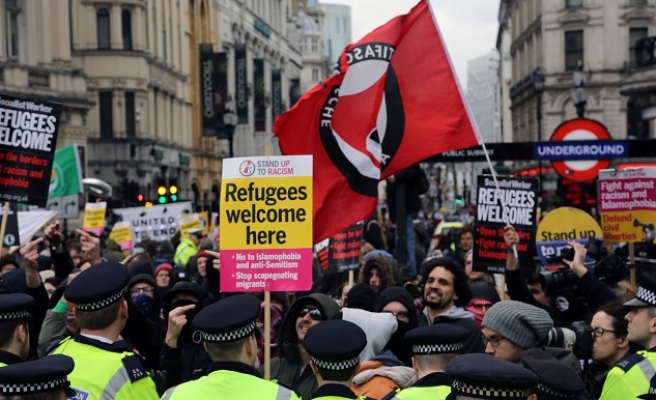 Protestors voicing their support for refugees took to the streets of European capitals Saturday, the day after the EU and Turkey sealed a deal designed to tackle the continent's biggest refugee crisis since World War II.

Thousands of people marched in London, Athens, Barcelona, Vienna, Amsterdam and several Swiss cities as Greece rushed to put in place the measures needed to enforce the deal sealed at a Brussels summit Friday.

Under the deal, all refugees arriving in Greece from Turkey from midnight on Sunday will face being sent back to Turkey.

The EU will take in one Syrian refugee from Turkish soil in exchange for every Syrian returned from Greece in a move designed to discourage people risking their lives by crossing the Aegean Sea in smugglers' boats.

In London, approximately 4,000 people joined a protest carrying placards with slogans like "Refugees welcome here" and "Stand up to racism".

Emiliano Mellino, a financial journalist from Argentina, added: "The situation right now in Syria, in Lebanon, in Jordan, in Turkey... the number of refugees they have, and the pressure those countries have, is incredible and Europe is not letting in enough people."

The protestors, who included many Afghan refugees, particularly women and children, chanted "Open the borders" and "We are human beings, we have rights".

"We're calling on the Greek government to stop aligning itself with the EU's anti-refugee policies," said pro-refugee activist Thanassis Kourkoulas.

Another protest in the northern city of Thessaloniki drew around 500 people, according to police.

Several thousand people marched in Barcelona carrying banners with slogans such as "No person is illegal", while the figure was roughly 2,500 in Vienna. Around 1,500 people also took to the streets of Amsterdam.

In Geneva, more than 600 people joined the protests to support the right of refugees to remain. Some were particularly protesting against the housing of refugees in bunkers.

There were also smaller protests in other Swiss cities such as Zurich and Lucerne.