Thousands rally in Finland for multiculturalism

Thousands of people have protested in Helsinki in support of multicultural Finnish society, after a Facebook post by Olli Immonen called immigrations a "nightmare". 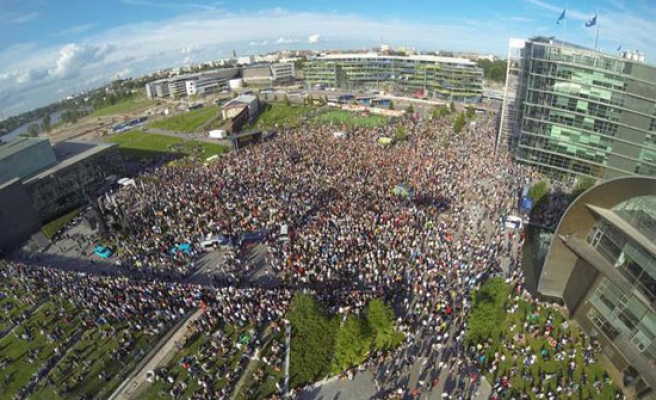 Thousands of people protested in Finland on Tuesday against a lawmaker's anti-immigration remarks and voiced their support for a multicultural Finnish society.

"We have been used to racism, but we must oppose this. We have been silent for too long and it is time to say out loud that it is not ok," said Turkish-born Ozan Yanar, a Finnish parliamentarian from the opposition Green party, at a Helsinki demonstration that gathered around 15,000 people.

The protests followed comments in a Facebook post by Olli Immonen, a lawmaker from the co-ruling Finns Party known for its euro-sceptic views.

"I'm dreaming of a strong, brave nation that will defeat this nightmare called multiculturalism. This ugly bubble that our enemies live in, will soon enough burst into a million little pieces," he wrote on Saturday.

"I have strong belief in my fellow fighters. We will fight until the end for our homeland and one true Finnish nation. The victory will be ours."

The Finns Party, second-biggest in the parliament, is known for backing tougher immigration laws, but has distanced itself from Europe's far-right parties.

Many Finns saw the timing and content of Immonen's remarks linked to the massacre of 77 people in Norway just over four years ago by far-right militant Anders Behring Breivik.

Immonen denied any intentional connection between his comments and the July 22, 2011 killings.

"Finland has always been international, and people coming here have significantly richened our culture and business life," he wrote in a blog.

Juhana Aunesluoma, research director of European studies at the University of Helsinki, said Immonen's remarks showed divisions in the Finns party after it entered the centre-right coalition government and had to deal with issues like the Greek crisis.

"There is a certain, feisty section inside the party, and the leadership has a challenge in its balancing act," said Aunesluoma.