Ticket to freedom as refugees arrive in Germany

Thousands of refugees, angry at Budapest wouldn't let them leave, have scrambled onto trains that reached Germany with EU asylum rules collapsing under the strain of the mass movement. 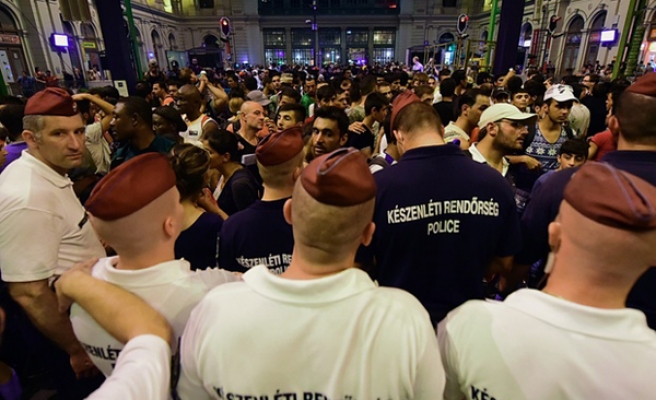 The 21.10 train to Munich, the last out of Budapest to Germany, was tantalisingly close, just a few metres the other side of a crush barrier and some ticket inspectors.

Hungarian police had been stopping refugees and migrants from boarding international trains since mid-August, even if they had bought valid tickets, but on Monday the police were, suddenly, nowhere to be seen.

Nervously watching the clock on the departures board as the line became more restless, he told AFP he doesn't mind where he ends up, but Hamburg would be best.

"By the sea, just like my hometown Latakia," on Syria's western coast, he said.

For refugees from Syria and elsewhere, the train stations of Budapest had become the latest tortuous bottleneck on a long journey north to Europe.

Frustrated refugees, pouring into Hungary at a rate of over 2,000 per day during August, were left to set up ever-growing makeshift camps outside the two main stations in Budapest.

"I'm going to wait here for a train as long as I can," a Pakistani shopkeeper, who said he left his home fed up at the Taliban robbing his shop takings every week, told AFP last weekend.

"No trucks!" he said, shaking his head at the mention of the Austrian truck tragedy last week, where the decomposing bodies of 71 migrants were discovered in an abandoned lorry near the Hungarian border.

But patience had been running thin.

"Germany Yes! Hungary No! Let us leave!" chanted hundreds of mostly Syrian migrants during angry protests outside Keleti at the weekend, demanding that a recent easing of asylum rules by Berlin meant they could go at last.

Then on Monday morning the police vanished and the refugees, scarcely believing their eyes, were allowed to climb onboard trains headed west.

"I'm not going to let the train go, it's far too full!" a flustered stationmaster shouted down his mobile phone beside one Vienna-bound train, his hand shaking.

Minutes later, after a phone call to the police, he blew the whistle and the train slowly pulled out -- next stop Austria.

Later, as the clock ticked closer to 21.10, the last train out, the crowd began to surge forward. A crush developed at the front and panicking parents passed toddlers overhead to aid volunteers, and safety.

"Children are fainting, everybody push back three steps!" cried an aid worker in English and Arabic through a loudspeaker, as several dozen police moved in to hold the line.

Order restored for a moment, the police stepped aside, letting hundreds rush through onto the train, before they moved in again to stop the surge once the train was full.

"No more trains until the morning!" cried the aid worker to exasperated groans a few minutes later.

'They have a chance'

"I'm sad to see them go to be honest, I got to know them all so well," said Baba Mujhse, a fluent Arabic-speaking Hungarian-Egyptian working as an aid volunteer at Keleti for months.

"But I'm happy too, they have a chance now of finding some kind of decent life," the 31-year-old told AFP after watching the train disappear into the night.

Spotting a familiar face among the hundreds left behind he high-fived one man, telling him not to worry and that he is sure they can bid farewell tomorrow.

"They got open-ended tickets now so they can keep trying again and again," said Marton Bisztrai, an Arabic-speaking Hungarian aid volunteer, who spent his day at Keleti helping people to buy the right ticket.

"I know many who lost over a thousand euros buying single ticket after ticket, turned useless after the police stopped them boarding," he told AFP.

The unlucky ones, resigned to at least another night in Budapest, slowly retreated from the empty platform, hauling their meagre luggage back outside the station.

"I just hope Hungary does not change its mind tomorrow," said one man as he found a spot for another night under the stars.