It wasn't long before the nation's icon Tintin shed tears for those killed and injured in the Brussels attack, quickly forgetting the attacks on Turkey 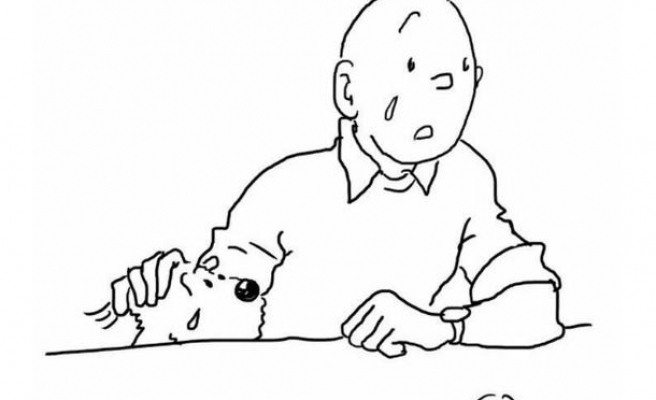 Within hours of the attacks on Brussels Tuesday, tens of thousands of people were sharing images on social media of the country's most famous creation in tears.

With many invoking Herge's cub reporter -- who always got the better of the baddies in the end -- one Twitter user put words into the boy hero's mouth: "Let's be strong, together and humane faced with these crazies.

"We are all Belgians," said a user called Ulysse, as Paris and Berlin announced they would light up the Eiffel Tower and the Brandenburg Gate in the colours of the Belgian flag.

But the most shared image of all was one showing a figure dressed in French colours putting an arm around a crying Belgian flag.

The drawing by the acclaimed cartoonist Plantu of France's Le Monde daily was captioned with the dates March 22 and November 13, the day 130 people died at the hands of gunmen and bombers in Paris.

As speculation turned to whether the same ISIL cell had planned the attacks on both cities, several other widely-shared cartoons took a more defiant and typically irreverent Belgian tone.

One showed a packet of fries, the country's most famous street food, with one of them seemingly giving the terrorists the finger.

"There are still 11 million of us," a Brussels lawyer tweeted soon after the attacks. "You are an annoyance but we won't give you the pleasure. Vive la frite!" (Long live the fry!)

The Belgian cartoonist Marec continued the theme, with the Statue of Liberty holding a packet of fries as Brussels' landmark "Peeing Boy" statue relieves himself onto the head of an Islamist extremist.

The analogy proved too tempting for a dozen other artists who had the cheeky little chap created by Hieronymus Bosch the Elder liberally watering the word "terrorism", AK 47 rifles and sticks of dynamite.

Another played on the statue's official name of the Manneken Pis to demand "Pis and love".

The French film-maker and graphic novelist Joann Sfar had the boy crying on his pedestal saying, "Is a bit of peace too much to ask?"

In another cartoon he posted on Instagram he had a tearful Tintin consoling his sidekick Captain Haddock: "Sometimes I want to leave for the Moon, Captain."

The Twitter hashtags #Belgium and #PrayForBelgium were trending across Europe and the United States as thousands offered their sympathy and support, while in France another hashtag appealing for Muslims not to be blamed made the top three.

Hundreds of people also offered to shelter people stranded by the transport chaos after the attacks with the hashtags #openhouse in English, French and Flemish.

But reaction to the attacks took an uglier turn in Britain where two newspaper columnists Katie Hopkins and Alison Pearson sparked outrage by linking the attacks to the migrant crisis and Britain's possible exit from the EU.

"Every one of you who said refugees are welcome... are responsible for Brussels," MailOnline columnist Hopkins tweeted.