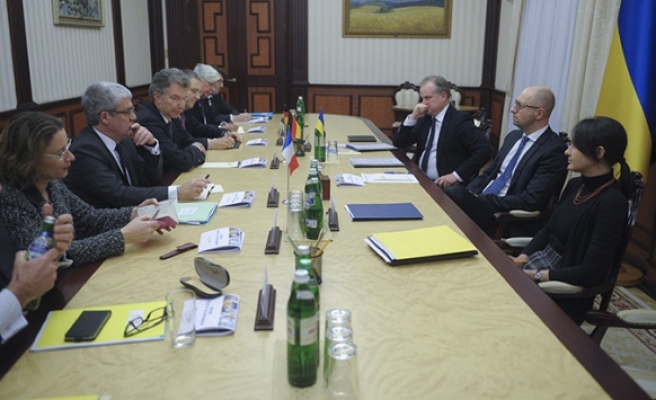 French presidential envoy Jacques Audibert and his German counterpart Christoph Heusgen arrived in Kyiv in the midst of a diplomatic upsurge in efforts to resolve one of Europe's deadliest crises since the Balkans war of the 1990s.

U.S. President Barack Obama and Russia's Vladimir Putin discussed the conflict during a rare but wide-ranging phone conversation on January 13.

Their senior aides met two days later in Russia's western exclave of Kaliningrad to thrash out new pathways to ending bloodshed that Kyiv and its Western allies insist was provoked and backed by Moscow -- a charge the Kremlin denies.

A high-ranking Ukrainian diplomat said Audibert and Heusgen arrived in Kyiv from a visit to Moscow whose details have not been disclosed.

"Right now, all our partners are trying to understand how to end this stalemate because in reality, there has been no improvement," the Ukrainian diplomat told AFP on condition of anonymity.

"This does not mean that they brought some sort of document for us to discuss," the diplomat added.

Poroshenko's website said he and the European envoys expressed concern about "numerous ceasefire violations by the rebels, and their impediment of work" by unarmed truce monitors from the Organization for Security and Co-operation in Europe (OSCE).

Ukraine and the insurgents last week signed a new truce agreement meant to quell violence that has claimed the lives of more than 9,000 people -- most of them civilians -- since April 2014.

Putin has repeatedly denied playing any direct role in a war that begun less than two months after the ouster of Ukraine's Kremlin-backed president.

But the Russian leader admitted for the first time last month that there were "people (in Ukraine) who work on resolving various issues there, including in the military sphere."