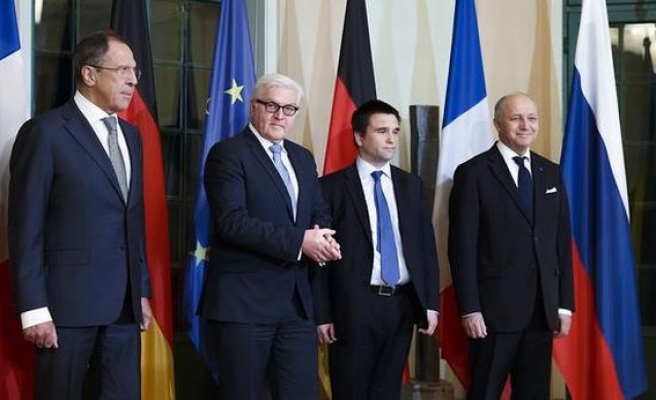 Progress has been made on some contentious issues in the peace process, the foreign ministers of Germany, Russia, Ukraine and France said after holding talks in Berlin on Saturday to prepare for a summit in Paris on October 2.

Germany's top diplomat, Frank-Walter Steinmeier, said the meeting had been "less confrontational" than previous ones and that the warring sides were now "very close" to an agreement on withdrawing heavy weapons from the frontline.

But Ukrainian Prime Minister Arseniy Yatsenyuk urged the West not to lift sanctions on Russia for its role in the Ukraine conflict unless the Minsk peace deal is fully implemented.

Yatsenyuk earlier Saturday told the West that Russia needed to fully respect the peace deal before there could be any talk of easing sanctions.

"If you send mixed signals to (President Vladimir) Putin, for example that we contemplate an idea to lift sanctions.... this is the weakness," Yatsenyuk said at the international Yalta European Strategy conference in Kyiv.

"This is the way... actually to underpin and support Putin in his aggression against Ukraine," Yatsenyuk said in a speech in English.

"Sanctions could be lifted only in one case, if Minsk is fully implemented, if Donetsk, Lugansk and Crimea (are) back (in Ukraine)."

Kyiv and the West accuse Russia of sending regular troops and weapons to aid the separatists in the east, where nearly 8,000 people have died in the conflict since April 2014. Moscow has always denied involvement.

In the conflict zone, a total ceasefire was announced starting September 1, and so far appears to be holding.

"We all agreed that the new ceasefire of September 1 has been respected and now needs to be further consolidated," Steinmeier said after the talks with his three counterparts.

Russian Foreign Minister Sergei Lavrov for his part said differences remained on the controversial issue of holding of local elections in east Ukraine's rebel-run areas, but "the general impression is that these differences can be overcome".

Under the Minsk peace deal, the separatist regions must conduct local elections by the end of the year.

Yatsenyuk on Saturday stressed that he has always been "sceptical" about the peace deal signed in Belarus in February after it was brokered by France and Germany.

"There is no good solution for Putin, so if he goes and says 'look we decided to leave Donetsk and Lugansk', he is politically dead in Russia," Yatsenyuk said, referring to the rebel-controlled regions.

Conversely, if Putin backs an offensive against the Ukrainian army, "trying to grab more land, he is dead in the world," he said.