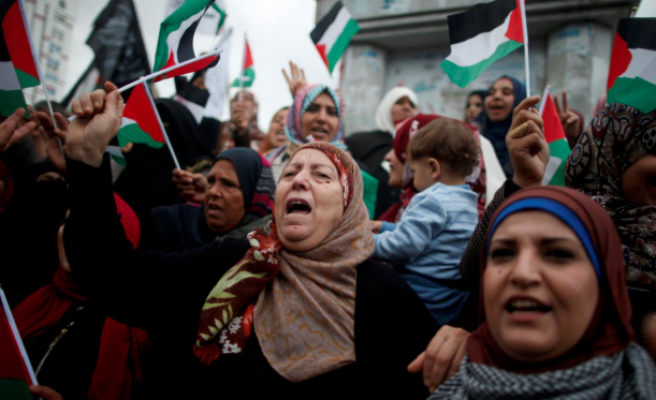 Thousands of protesters rallied in front of the U.S. Embassy in London in a protest against the controversial decision by the U.S. administration to recognize Jerusalem as the official capital of Israel.

Around 3,000 people joined the protest according to organizers and shouted slogans in solidarity with the Palestinians. Some protesters carried Palestinian and Turkish flags at Grosvenor Square where they gathered.

The emergency protest Hands Off Jerusalem was organized by London-based Palestine Solidarity Campaign and it was held hours after fierce clashes in Jerusalem, the West Bank and the Gaza Strip. At least one Palestinian protester was reportedly martyred by Israeli security forces.

Protests were also held in various other U.K. and Irish cities including Manchester, Bristol, Birmingham, Nothingham, Dublin, Belfast and Londonderry.

Thousands of people from Jakarta to Istanbul, Islamabad to London protested Trump’s move.

A similar protest is planned in London for Sunday.

After Friday prayers, thousands of Palestinians rallied in the Gaza Strip, the West Bank and East Jerusalem to protest a decision by U.S. President Donald Trump -- announced earlier this week -- to recognize Jerusalem as Israel's capital.