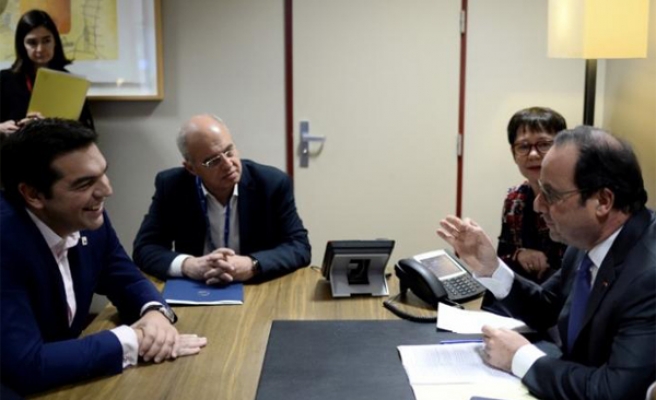 The two leaders, meeting on the sidelines of a summit in Abu Dhabi on the protection of heritage sites, also agreed on the need for a swift technical deal before eurozone finance ministers meet next week.

The ministers, meeting as the Eurogroup, will on Monday discuss Greece's massive 86-billion-euro bailout, its third since 2010.

During the previous review of Greece's reform programme in May, the EU and IMF agreed to start discussions on debt relief by the end of the year if Athens keeps its reform pledges.

But influential Germany firmly opposes any new concessions to Athens ahead of German elections next year in which anti-EU populists could see a significant surge in support.

Tsipras and Hollande "both underlined that a deal on a technical level is needed by December 5, and measures for debt relief by the end of the year are imperative", the Greek leader's office said in its statement.

Greece's leftist-led government is desperate to reach agreement with the country's creditors before the end of the year in order to secure a pledge of debt relief, hoping that it will kickstart the ailing economy.

Athens is also hoping that a deal will persuade the European Central Bank to include Greek sovereign debt in its asset purchase programme, known as quantitative easing or QE.

Without debt relief, the ECB will not grant Greece access to quantitative easing and without this the country will not be able to return to the borrowing markets, Finance Minister Euclid Tsakalotos warned last week.

On Tuesday EU Economy Commissioner Pierre Moscovici voiced optimism of concluding an overall deal on Greece's latest bailout programme by the end of December, including discussions on debt relief.

Greece's debt will grow to 315 billion euros ($334 billion) -- around 180 percent of output this year -- according to the Greek finance ministry.

The International Monetary Fund has said it will not join the latest bailout until it sees a concrete plan from the Europeans to substantially cut the debt burden.

Greek Deputy Prime Minister Yannis Dragasakis in an article in the Efimerida ton Syndakton newspaper on Saturday called for a positive outcome of the Eurogroup meeting on Monday, to send "a powerful message of stability and hope in a climate of volatility, not only for Greek society but also for Europe as a whole".

Referring to the IMF-EU rift on the issue of debt, he said that the role of the IMF in Greece's bailout programme "will forecast the way other (European) countries' debts will be dealt with in the future" and stressed that the ongoing clash between wider interests is complicating the "solution" of Greece's problems.