Syriza to seek accord with anti-bailout Independent Greeks. Party official says new government likely to be sworn in by Weds 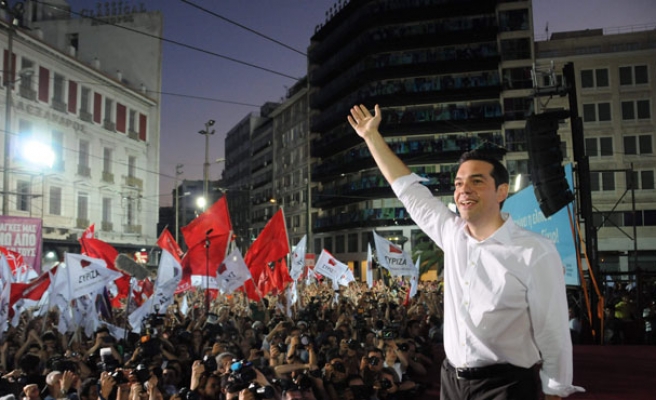 Greek leftwing leader Alexis Tsipras will move on Monday to build a stable government that can take on international lenders and reverse years of painful austerity following a crushing election victory by his Syriza party.

Fresh from his defeat of conservative Prime Minister Antonis Samaras, the 40-year-old Tsipras will meet the head of the small Independent Greeks party which, like Syriza, opposes Greece's bailout deal.

Syriza won 149 seats in the 300-seat parliament in Sunday's election, two short of an absolute majority, but the result marked a comprehensive rejection of the years of austerity demanded by the European Union and International Monetary Fund in return for the 240 billion-euro bailout.

Syriza's campaign slogan "Hope is coming!" resonated with voters worn down by huge budget cuts and heavy tax rises during the years of crisis that have sent unemployment over 25 percent and pushed millions into poverty.

Tspiras aims to move swiftly to create the first euro zone government elected to undo the orthodox conservative polices of strict budgetary rigour that German Chancellor Angela Merkel has championed for the bloc's most troubled economies.

He expects to be sworn in as prime minister on Monday and have a government in place by Wednesday morning at the latest, according to a Syriza official.

For the first time in more than 40 years, neither the New Democracy party of Samaras nor the centre-left PASOK, the two forces that had dominated Greek politics since the fall of a military junta in 1974, will be in power.

Tsipras is due to meet Independent Greeks leader Panos Kammenos at 10.30 a.m (0830 GMT) and also expects to talk to the heads of two other parties, the centrist To Potami and the communist KKE, a sign he may look for their support even if they do not join a formal coalition.

The Independent Greeks, a rightwing party with a hardline stance against illegal immigration, disagrees with Syriza on many social issues which could create tensions but it shares its opposition to the international bailout.

The 40-year-old Tsipras, who promises to keep Greece in the euro, has toned down his rhetoric and said he will negotiate an agreement with the "troika" of the EU, European Central Bank and IMF.

However, he has promised Greek voters to renegiotiate the country's huge debts, causing consternation in Berlin which has insisted that Athens honour the terms of its 2010 bailout deal.

Together with last week's decision by the ECB to pump billions of euros into the euro zone's flagging economy despite objections from Germany, Syriza's victory marks a turning point in the long euro zone crisis.

But after the euphoria of election night, hailed by flag-waving crowds in Athens, Tsipras faces daunting challenges and can expect strong resistance to his demands from Germany in particular.

With Greece unable to tap the markets because of sky-high borrowing costs and facing about 10 billion euros of debt payments this summer, he will have to seek a deal to unlock more than 7 billion euros of outstanding aid by the time the bailout is due to expire on Feb. 28.

The euro hit an 11 year-low versus the dollar after initial results came out, as markets reacted to the prospect of a standoff within the EU, although many analysts believe a Syriza government can reach a settlement with its partners.

However, Syriza's victory will also encourage other anti-austerity forces in Europe and add impetus to calls for a change of course away from the focus on budget belt-tightening and structural reform favoured by Berlin.

Those calls have come not just from anti-system movements such as Podemos in Spain but also from leaders such as French President Francois Hollande, who congratulated Tsipras on his win, and Italian Prime Minister Matteo Renzi.