Syriza, which holds a slim opinion poll lead over Prime Minister Antonis Samaras' centre-right New Democracy party, has moderated its tone in recent months, pledging to keep Greece in the euro and not to unilaterally repudiate the bailout deal. 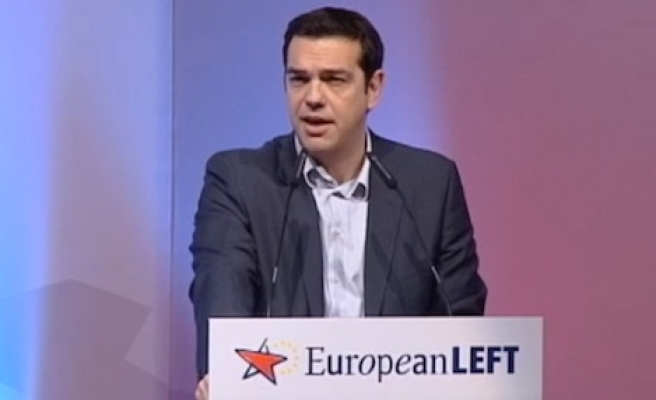 Speaking at a party congress on Saturday, three weeks before a Jan. 25 general election, Tsipras also said his Syriza party would ensure much of Greece's debt was written off as part of a renegotiation of its international bailout deal.

The election takes place three days after a Jan. 22 policy meeting at which the ECB may decide to proceed with a quantitative easing (QE) programme to pump billions of euros into the euro zone economy by buying government bonds.

Tsipras said he hoped ECB President Mario Draghi would decide to go ahead with the programme and said Greece could not be shut out, as some economists and politicians from countries including Germany have suggested.

"Quantitative easing by the ECB with direct purchases of government bonds must include Greece," Tsipras said.

The comments underline the pressures facing Draghi ahead of the decision, with many in Germany opposed to full-scale QE which they fear will create asset bubbles and remove incentives for reform-shy governments to act.

Greece's radical leftist Syriza party led the ruling conservatives by 3.1 percentage points in an opinion poll conducted after it became clear that a snap election would be called, the pollster Rass said on Saturday.

The survey for Sunday's Eleftheros Typos newspaper was conducted on Dec. 29 to 30, after Prime Minister Antonis Samaras failed to have his candidate elected president by parliament.

The poll put support for Syriza at 30.4 percent against 27.3 percent for the conservatives of Samaras's New Democracy party, if an election were held now, a slight narrowing from a 3.4 point lead in a previous Rass poll last month. The election has been set for Jan. 25.

In the latest survey, the KKE communist party was third on 4.8 percent, followed by the centre-left To Potami with 4.7 percent, and the far-right Golden Dawn with 3.8 percent. The Socialist party Pasok, which rules in coalition with New Democracy, polled just 3.5 percent.

Syriza has led New Democracy in opinion polls for months, but its lead has narrowed in recent weeks.

In the poll, 74.2 percent agreed that Greece must stay in the euro zone "at all costs", and 24.1 percent disagreed. The survey was conducted on a sample of 1,002 Greeks.

But the prospect of a Syriza-led government has set financial markets on edge and caused alarm in Germany, where a succession of politicians and economists have argued the euro zone could cope with Greece's exit.

In a speech laced with barbs against German Chancellor Angela Merkel and finance minister Wolfgang Schaeuble, Tsipras said his party would roll back many of the austerity policies imposed by the bailout "troika".

"Austerity is both irrational and destructive. To pay back debt, a bold restructuring is needed," he said.

Repeating many policy pledges first laid out last year, he promised to do away with a real estate tax, freeze house foreclosures, raise the minimum wage and reinstate a 12,000 euro ($14,400) tax-free threshold to help low earners.

He said he would abandon the goal of achieving primary budget surpluses, aimed at cutting Greece's debt burden equivalent to more than 175 percent of gross domestic product.

But he pledged to protect bank deposits and ensure public finances remain on a sound footing.

Tsipras is right to point out that Merkel is not the boss of all of Europe. That is why it called the European Union and not Germany's union.... Germany once again are proving to be the fascist terrorists that they have shown to be time and time again historically... Tsipras is just someone who hasn't been bought off by corruption like the other Greek politicians. And when Germans talk about Greek corruption they forget that they play a key role in that corruption,....

Kick Greece out already. Sick to death of this little country with an ego the size of America, constantly dictating how things should go. The Eurozone - the world in fact - needs stability. That's hard enough to achieve, near impossible with the likes of Greece, throwing their toys out if the pram at every turn. We get it already austerity really bites over there, but how is it fairer for more frugal nations to pay for Greece's boom years. Enough is enough.