A Turkish company has sent a boat to help clean-up efforts along the Turkish Cypriot coastline, where a tanker spilled more than 100 tons of fuel oil late on Tuesday. 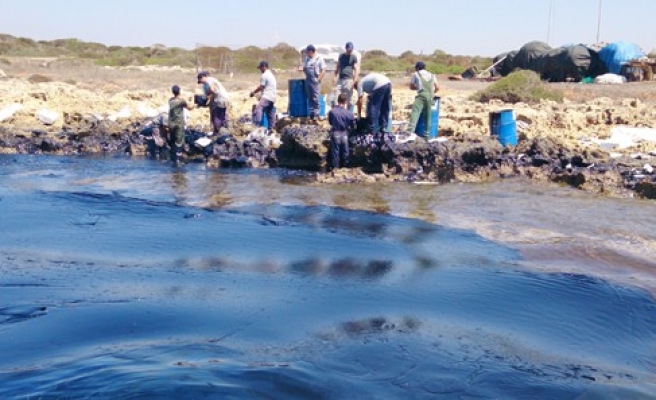 A Turkish company has sent a boat to help clean-up efforts along the Turkish Cypriot coastline, where a tanker spilled more than 100 tons of fuel oil late on Tuesday.

The spill occurred early on Tuesday as the tanker offloaded fuel at a power station in the Turkish Cypriot-controlled north of the Mediterranean island, Turkish Cypriot Environment Minister Mehmet Harmancı told Reuters in a telephone interview. The tanker was delivering fuel to the Kalecik power plant owned by Aksa Enerji, the İstanbul-based electricity producer said in a statement to Bourse İstanbul (BIST).

Aksa said on Wednesday that the company had made a contract with a Turkish firm to help clean up the oil spill. Aksa did not provide the name of the company. The firm said close to 40 tons of fuel oil had spilled into the Mediterranean and that a barrier had been established to contain the spill. The reason for the disparity in the amount of fuel spilled was not immediately clear.

The spill occurred near the town of Bafra, or Vokolida in Greek, which is on the southern side of the Karpasia peninsula, a nature reserve that serves as a breeding ground for rare turtles that lay their eggs in the sand in July and August. The range of spill was far from threatening wildlife and tourism facilities on Turkish Cyprus, Today's Zaman learned from local sources familiar with the issue. “A boat from Turkey arrived today and we expect the cleaning to be accelerated. … The problem does not seem very serious," the same sources said.

"The company says the spill occurred due to a problem with the pressure but it may have been due to an improper connection," Harmancı said, adding that human error has not been ruled out.

Local authorities were struggling to contain the slick covering a 7 kilometer (4.5 mile) area along the Karpasia peninsula, he said. Clean-up materials, including solvents, were being sent from Turkey by air but had been delayed.

A barrier has been established but officials are worried about further leakages and are seeking to extend it, Harmancı said, describing the risk as "ongoing."

Aksa said operations at the Kalecik power station were unaffected.

K am interested to know how the normal course of procedures were compromised. Both the TRNC and the vendor must execute independent inquisitions.