Turkey's Erdogan recall the extradition of the fugitive Can Dundar 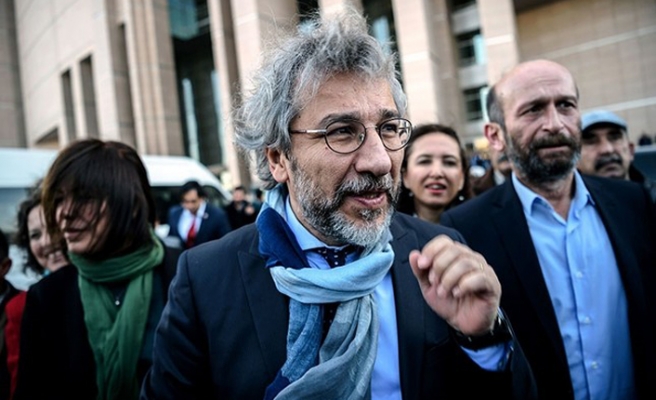 Turkish President Recep Tayyip Erdogan on Friday recalled an extradition agreement between Turkey and Germany and called fugitive Can Dundar “a convict, spy.”

“Currently, this individual [Dundar] is convicted by Turkish courts of being a spy and disclosing state secrets,” said Erdogan in a joint news conference with German Chancellor Angela Merkel.

Erdogan also said that it is Turkey's basic right to seek the extradition of Dundar, who has been sentenced to prison for five years and 10 months, in line with extradition agreement with Germany.

In May, 2016, the 14th High Criminal Court in Istanbul had convicted Dundar, the former editor-in-chief of Cumhuriyet daily, and Erdem Gul following the publication of images purporting to show arms being transported to Syria in trucks belonging to Turkey’s National Intelligence Organization, also known as the MIT.

The two defendants were arrested late November 2015 and held in prison until Feb. 26, 2016 when Turkey's Constitutional Court ruled that their rights had been violated and ordered their release.

On bilateral relations with Germany, Erdogan noted that the two countries reached a consensus on reviving cooperation mechanisms.

"We are in favor of preserving and further strengthening this momentum we have achieved through mutual high-level visits," he said.

Underscoring Turkey’s expectations from Germany on combating terror groups more effectively, he said: “There are thousands of PKK terrorists living across Germany.”

“There are hundreds of FETO [Fetullah] terrorist organization members in Germany,” he added.

FETO and its U.S.-based leader Fetullah Gulen orchestrated the failed coup of July 15, 2016, which left 251 people martyred and nearly 2,200 injured.

Erdogan said extradition of criminals was highly significant for safety, peace of Turkey and Germany.

Erdogan also pointed to more than a million war victims in Syria over the seven years.

"Turkey is taking on serious responsibilities on regional issues, particularly Syria crisis," Erdogan said, adding that Germany has a similar approach to the issue.

“Turkey and Germany have taken responsibility during the acute period of the migrant crisis, and eased the process by devoting serious sacrifice,” he added.

"Ensuring visa liberalization and initiation of the customs union update, along with reviving of Turkey's [EU] access negotiations, will be beneficial for both the European Union and Turkey."

The president said Turkey hopes this "critical" process would not be exposed to the stonewalling and whims of specific circles and added, "Turkey attaches importance to Germany's support."

He further stressed that Turkey "is ready and has the power" to eliminate all threats including economic threats.