In another round of fighting, two Ukrainian soldiers and several others have been wounded in clashes with in the east 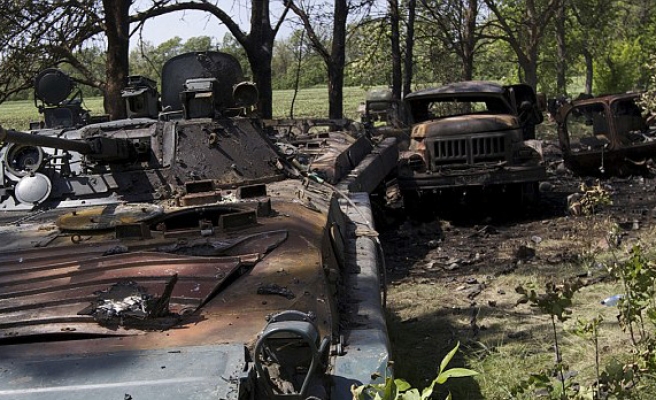 Two Ukrainian soldiers have been killed in the latest uptick in fighting with pro-Russian separatists in the country's war-torn east, a Kiev military official said Saturday.

"As a result of fighting two Ukrainian servicemen were killed and another eight were wounded," Ukrainian military spokesman Oleksandr Motuzyanyk told journalists.

He accused the pro-Russian separatist rebels of using banned heavy weaponry over the past 24 hours, saying there were almost no quiet areas on the frontline.

In a separate incident, another three Ukrainian officers were wounded in a blast caused by an unidentified explosive device, he added.

Motuzyanyk reported that the government-held town of Avdiivka, some 10 kilometres (six miles) north of the rebels' de facto capital Do     netsk, came under fire from 82- and 120- millimetre calibre mortars.

These and other kinds of heavy weapons are prohibited under the peace agreements aimed at ending the 23-month conflict.

More than 9,000 people have been killed and more than 20,000 injured since the revolt against Ukraine's new pro-Western leadership erupted in eastern Ukrainein April 2014.

A series of truce agreements have helped to reduce the fighting, although sporadic clashes continue on the frontline.

Kiev and the West accuse Russia of supporting the insurgents and sending regular troops across the border, claims that Moscow denies.