Campaigning musician tells Turkey: 'What you do is an extraordinary thing; it's a lesson in courtesy' 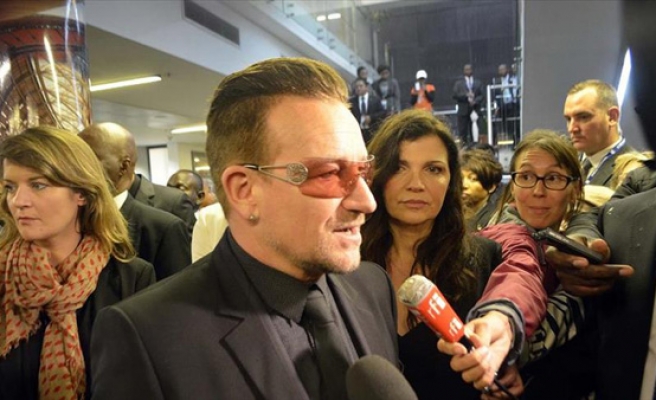 World-famous Irish rock band U2's singer Bono has praised the “courtesy” of the Turkish people in their support for Syrian refugees.

The musician and campaigner was in Ankara on Sunday, meeting Prime Minister Ahmet Davutoglu. Davutoglu was hosting a delegation which included several members of the U.S. Congress.

"I feel honored by the courtesy of the Turkish people. What you do is an extraordinary thing; it's a lesson in courtesy", Bono said, adding that the public had “opened doors for their neighbors”.

The Irish singer-songwriter said Turkey was at the top of the list of countries hosting refugees, adding that the Turkish model deserved attention.

Stating the he had recently visited a camp on the Somali border which had been standing for 20 years, Bono said many of its inhabitants had been born there, meaning the authorities “don't know what to do with this population".

“You are applying a quite different model in Turkey and we should understand how you achieved this", he added.

Speaking alongside the singer, Davutoglu said that the thousands of Syrian children born under Turkish protection “are also members of our family”.

"There are 300,000 people in the camps,” he said. “The majority of the rest is living in cities. Our schools are giving education to Turkish and Syrian students. More than 100,000 Syrian babies were born in our hospitals. They are also the members of our family."

The conflict in Syria has now driven more than four million people – a sixth of the country’s population – to seek sanctuary in neighboring countries, making it the largest refugee crisis for a quarter of a century, according to the UN.

Turkey is now the largest refugee-hosting country in the world, with at least 2.7 million Syrians, and so far has spent more than seven billion euros ($7.7 billion) meeting their needs.