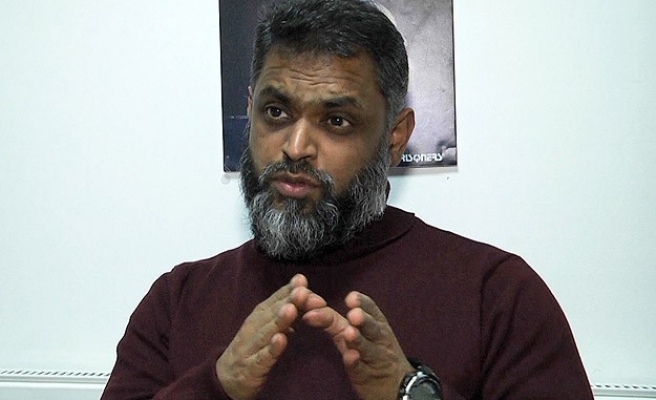 Former Guantanamo detainee Moazzam Begg says he believes that "vindictive" terror charges levelled against him in the U.K. - which have now been dropped - were brought because of his efforts to expose links between the British and U.S. governments and Syrian President Bashar al-Assad's regime.

Speaking to Anadolu Agency in an exclusive interview, Begg, who was charged in Britain in February with seven Syria-related terror offences, said the court case against him collapsed after it emerged MI5 had spoken to him about his trip to Syria trip and assured him he could go about it unhindered.

Begg said: "The reason I think they went for me is because somebody, and I think it is someone high up in the government, said, ‘This Mr Begg character is causing us too much embarrassment. He keeps pointing out how we’ve been involved in secret rendition, in kidnapping, torture, and abuse of people’s basic human rights'.

"The reason why I went to Syria in the first place was because I found a link between British intelligence services working with Bashar al-Assad."

The 46-year-old walked free from Belmarsh prison in London at the start of October after the case against him at the Old Bailey, which had been due to start within days, was dropped after Crown prosecutors told the judge that they had "recently become aware of relevant material".

Begg, who had entered a not guilty plea, had spoken to the U.K. intelligence services in the presence of lawyers and informed them why he was travelling to Syria, but the information was not passed onto police or the Crown Prosecution Service until Begg had already been in custody for seven months.

Speaking to AA from the offices of Cage, a charity which works on behalf of the victims of the so-called "war on terror" and of which he had been a director at the time of his arrest, said he had told MI5 that he was travelling to Syria to investigate rendition and how intelligence was passed onto the Syrian regime by U.K. security forces.

Speaking calmly, Begg who was incarcerated on three separate continents; Bagram in Afghanistan, Guantanamo Bay Cuba, and Belmarsh in the U.K – all without ever being taken to court - said he found evidence of collaboration of the British intelligence services and Bashar Al Assad’s regime.

He said: "I found evidence of this from one of the Libyans who I know had been rendered by the Syrians who had found him in Syria, before any of the revolutions took place, and was handed over to the Libyans.

"We know this because the headquarters of the intelligence (services) of the Libyan government was stormed by the rebels and they discovered documents that showed this man had made a telephone call to Britain and his call had been intercepted by MI5, who handed that information to the Assad regime.”

He said he had uncovered numerous cases which showed the American intelligence agencies had been working with the Assad regime.

However, he says that the British involvement was indicative of a wider policy.

"Lies and manipulation are what’s on the menu," he added.

Begg, who was arrested at his home in Birmingham, was kept as a Category A prisoner – a regime used for the most dangerous prisoners.

However, he said he was "disappointed" when the case against him was dropped, saying he had been waiting for the fight and was confident he had done nothing wrong.

Once Begg was released he revealed he had offered to help work towards the release of British hostage Alan Henning, whose beheading by Islamic State of Iraq and the Levant (ISIL) militants in early October was shown on an ISIL video, but he said the offer was rejected by the U.K. government.

He said that if it was not for Turkey, rather than 200,000 Syrian deaths that there would have been half-a-million.

He said Turkey was the only lifeline for the Syrian people.

“I don’t think there is a link between ISIL and the Turkish government,” said Begg, adding: "There may be a reality in that they both oppose the Assad regime, but that doesn’t necessary make them work together."

"If you see the numbers of people in the refugee camps, which the Turks by their graces have built and helped the Syrians with, despite all of their problems, and then you come to the realizations, what the Turks have done for the Syrians has been a brotherly stance and act … and I don’t think the Syrians will forget that," said Begg.

"Turkey has its own interests, and its interest is maintaining the support of the civilians," he added.

Moazzam Begg was arrested in Pakistan in 2002 and initially kept at Bagram airbase I in Afghanistan before being taken to Guantanamo Bay where he was released without charge in 2005.

Begg told AA that he would continue his work with Cage and also argue that those that have traveled to Syria to fight should be allowed back into the U.K. and not be treated like terrorists.