Police have arrested at least 30 people during a protest in the English town of Dudley. 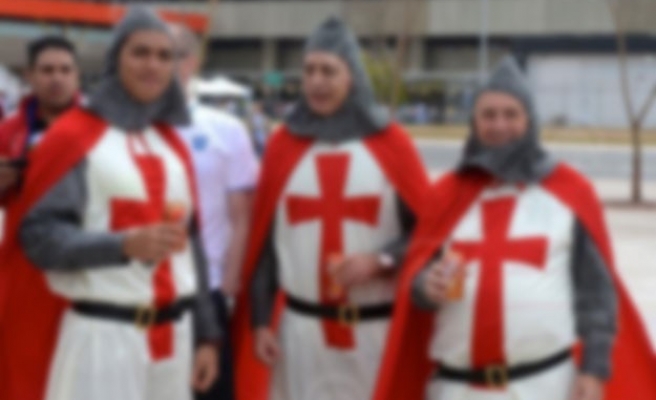 At least 30 people were arrested Saturday night following a demonstration by a far-right group against a planned mosque construction in the small English town of Dudley.

The protest was led by the English Defense League or EDL that saw participation of up to 1,000 of its members amid a heavy police presence.

“I have never seen so many policemen here,” said Maria Mina, owner of the only cafe shop that was open on what supposed to have been the busiest day for business in the small town.

Extra police force was deployed in Dudley since early hours of Saturday and entrance to the town center was restricted for vehicles as hundreds of fascist EDL members came to the town by cars, coaches and trains.

EDL members were allowed to march to Priory Road where they made harsh anti-Islam speeches, carried Islamophobic banners and English flags in front of the Dudley Council.

“Islam go to hell” and “More Islam less freedom” read some of the banners.

In a counter demonstration organized by United Against Fascism approximately 50 meters away from the Dudley Central Mosque at Castle Street, Dudley’s local people repeatedly gave out the messages of unity and togetherness.

“Love music, hate racism” was the main slogan of the gathering that hosted about 300 people.

Various bands took to the stage and demonstrators enjoyed hot food, coffee and tea at the Dudley Central Mosque on the invitation of the mosque’s imam, Hashim Qudoos.

“We all know what the depression of 1930s’ Germany caused in Europe,” Melanie Powell, another UAF activist, said.

While Christian, Muslim and Sikh leaders of the town gave out messages of peace and unity, hatred raged at the EDL demonstration. One masked member even hit the AA camera while the cameraman was filming.

“We are here today to oppose the EDL, a racist organization of street thugs who have got a history of attacking mosques,” Ian Marie, president of Sundwell national union of teachers and one of the UAF organizers, told AA.

Dudley councilor Pete Lowe was also on stage and repeated that the EDL were not welcome in Dudley.

“They (EDL) do not oppose Dudley mosque, they oppose any mosque, any right for people to practice their own religion. They are Islamophobic,” Lowe said.

Police used metal walls to separate the two demonstrations and only permitted disabled citizens and press members through the barriers.

One policewoman told AA that EDL members cannot be banned from the town and contained because of “people’s freedom of movement.”

Both demonstrators ended in the early hours of evening and most EDL members were directed to their coaches by police and escorted out from Dudley.

However, things turned nasty after a while when some members who stayed in the town started causing trouble with the police. They attacked police crew and threw beer cans and stones at them.

In November 2014, Dudley Muslim Association won the planning permission for a £18 million place of worship, which will have a 62 feet (18.9 meters) high minaret.

Far-right groups like EDL have opposed the mosque plan.

EDL is a far-right fascist group that tries to force a negative perception and bad reputation of Islam in the United Kingdom.  In November 2010, British police warned that the anti-Muslim EDL demonstration fueled extremism and harmed social cohesion in Britain.

Saturday's EDL rally has thought to have caused a loss of about £2 million to local businesses.

EDL plans to hold its next rally in Manchester on March 7.