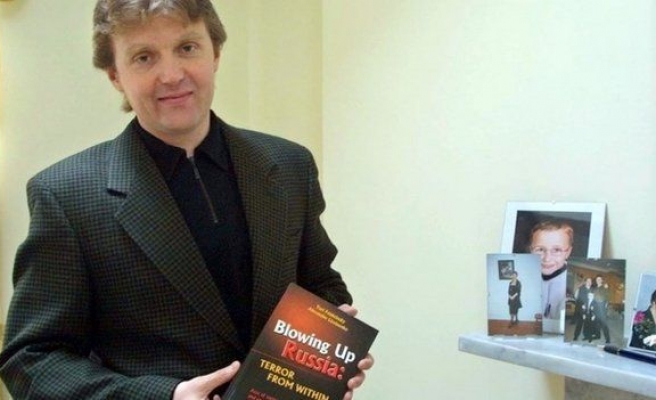 A British inquiry into the death by poisoning of former Russian spy Alexander Litvinenko in London will publish its findings on Thursday in a move likely to strain relations with the Kremlin again.

Litvinenko was allegedly poisoned at a hotel by a cup of tea laced with polonium-210 -- a rare radioactive isotope only available in closed nuclear facilities -- in a story which could have come from a grisly Cold War thriller.

Litvinenko's killing caused widespread public outrage in Britain after traces of the radioactive poison were found at various sites around London. A lawyer representing the late spy's family called it "an act of nuclear terrorism".

The inquiry's lawyer Robin Tam said at one of its hearings that there are "a number of strands of evidence relating to possible Russian state responsibility" -- a claim that Litvinenko's widow Marina has long supported.

He was working for the British spy agency MI6 when he was poisoned.

All eyes will be on whether the inquiry's chairman, judge Robert Owen, points the finger at Russia and what the diplomatic fallout could be if he does.

The Guardian newspaper on Tuesday reported that British diplomats are urging Prime Minister David Cameron not to launch new economic sanctions against Russia as a result of the inquiry's findings, as these could harm delicate talks on Syria.

The original police investigation led British prosecutors to demand the extradition from Russia on murder charges of Andrei Lugovoi, a former Kremlin bodyguard who had tea with Litvinenko at the Millenium Hotel in London's upmarket Mayfair area.

Russia has refused to extradite him and Lugovoi, who has since been elected to the Russian parliament as a member of the far-right nationalist LDPR party, has loudly protested his innocence.

The latest inquiry has focused less on Lugovoi and more on his friend and associate Dmitry Kovtun, a former Red Army soldier and businessman who was also at the meeting in the hotel with Litvinenko.

The inquiry heard that Kovtun told a friend of his from Germany that he had some poison and needed a contact for a cook in London to kill Litvinenko.

Kovtun, who worked in a restaurant in Hamburg for several years, also allegedly told his friend that Litvinenko was "a traitor with blood on his hands".

The inquiry started last year and included several closed-door hearings on intelligence material deemed too sensitive to be heard in public.

Tam said traces of radiation showed there may have been a previous poisoning when Litvinenko, Lugovoi and Kovtun met at a London private security company two weeks before the alleged fatal incident.

"One of the most significant things that the evidence suggests is that Litvinenko was poisoned with polonium not once but twice," he told the inquiry at the Royal Courts of Justice last year.

Marina Litvinenko told AFP in an interview last year that holding an inquiry was the best that she and her son Anatoly could hope for, short of a trial for Lugovoi and Kovtun, who are both in Russia.

"My struggle has been for the facts to be made public," she said, adding: "This is the last thing I can do for him, defend his name."

Her lawyer Ben Emmerson said Litvinenko had been investigating alleged ties between Putin and organised crime just before his killing, pointing to this as a possible motive for the murder years after Litvinenko had fled prosecution in Russia.

Litvinenko served in the KGB during Soviet times and then in its successor agency, the FSB, when Putin led it before becoming president in 2000.

In 1998, he and other FSB agents gave a press conference in Moscow accusing the agency of a plot to kill Boris Berezovsky, an oligarch who helped bring Putin to power but later turned against him.

Litvinenko was tried for abuse of power and, while acquitted in 1999, he fled Russia fearing further prosecution.

He was granted asylum in Britain with financial sponsorship from Berezovsky, who himself was found dead at his British home in 2013.