'Stop butcher al-Sisi', 'Cameron shame on you, British values where are you?' are some messages protesters are giving out as Egypt's Sisi meets British PM 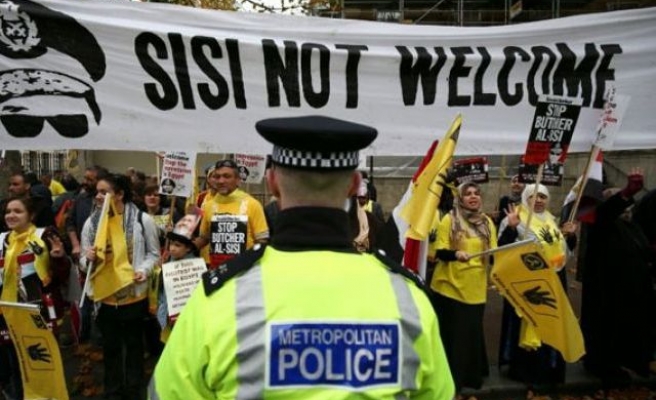 A large group of demonstrators outside 10 Downing Street is continuing to register its protest against Abdel Fattah el-Sisi’s visit to London as he meets with British Prime Minister David Cameron.

Several protesters could be seen Thursday carrying banners and chanting slogans against Sisi and his regime.

“Cameron invite refugees not dictators”, “Stop butcher el-Sisi”, “Cameron shame on you, British values where are you?” were some of the messages given out by the protesters, who came not only from the U.K., but all over Europe.

A family of five from Spain was among a group of anti-Sisi demonstrators. Nadia, 21, said that they did not want Sisi in Britain or in Spain, and instead only wanted Egypt’s first democratically-elected President Mohamed Morsi back.

The head of the Egyptian Revolutionary Council, Maha Azzam, also joined the protests against Sisi’s visit. Azzam said that Cameron should clearly tell Sisi that human rights violations in Egypt were unacceptable.

Later, Sisi shook hands with Cameron outside 10 Downing street and without sharing any comments with the media went inside for a meeting, which continues.