Muslim pupils at risk of 'extremist views and radicalization' claims education standards body, but Asghar Bukhari of the Muslim Public Affairs Committee says "To me, this is just another witch hunt against Muslims" 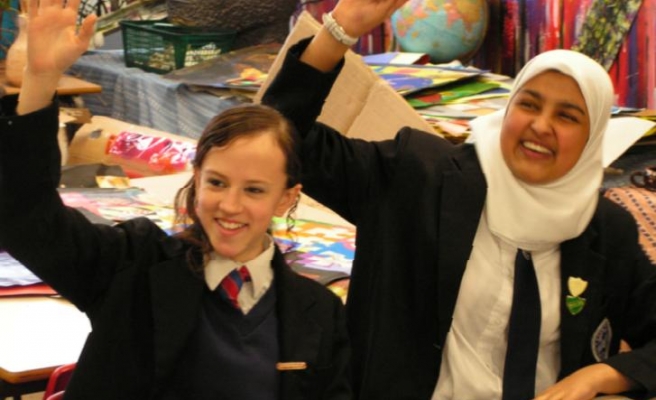 A report by the U.K.'s education standards body Ofsted which declared six Muslim schools in east London to be "at risk of extremist views and radicalisation" amounts to a "witch hunt," a Muslim group has said.

The comments came on Friday after Sir Michael Wilshaw, the chief inspector of the Office for Standards in Education, Children’s Services and Skills (Ofsted) said in an advice note to Education Secretary Nicky Morgan that he was "extremely concerned about the large number of failings in each of the six independent schools inspected."

In a report released on Friday into six independent Muslim schools, Wilshaw said students’ "physical and educational welfare is at serious risk."

But Asghar Bukhari of the Muslim Public Affairs Committee told Anadolu Agency: "To me, this is just another witch hunt against Muslims.

"Young people are supposed to explore different ideas, supposed to go through challenging views and ideologies, and mull them over and be allowed to do that, not be demonised for taking a different stand or listening to the opinion of someone the government doesn’t like."

After schools were examined, inspectors said they found pupils did not know the difference between sharia and British law.

But Bukhari said: "Muslim schools should not be subject to such kinds of questioning.

"At that age I didn’t know what either law was. They will never be in a situation where they will have to obey Islamic law because they’re living in England."

He added: "What a pathetic question, a loaded question designed to separate Muslims from the rest of society. It's a politicized question that would have no real meaning to a young child.

"Unless I fell asleep and woke up in communist Russia or Nazi Germany, schools are not the eyes and ears of the state."

Following the "Trojan horse" affair in Birmingham in March, where conservative Muslims were accused of plotting to take over Muslim majority schools, the government has stressed the teaching of "fundamental British values."

Sir Michael Wilshaw said in his note to Morgan: "I am not convinced that the leaders of these schools have sufficient capacity to bring about the necessary improvements to safeguarding, the curriculum and the quality of teaching and learning.

"Given the evidence gathered from these inspections, particularly in relation to the narrowness of the curriculum, I am concerned that pupils in these schools may be vulnerable to extremist influences and radicalisation."

Ofsted also said in a report that one of the schools "did not prepare pupils for modern British life."

The report added: "The narrowness of the curriculum means that students' spiritual, moral, social and cultural education, in particular their understanding of the fundamental British values of democracy, the rule of law, individual liberty and mutual respect and tolerance, is underdeveloped."

It also said pupils lacked opportunity to take part in music, art and drama and some students had "narrow" views on women.

Bukhari questioned the statement, saying: "What prepares you for life? Your education? Your ethics? If they mean that you’re not prepared to live as a second-class citizen as a Muslim, and be ashamed of who they are, then okay, perhaps it doesn’t prepare them.

"But if they mean to be a free-thinker, someone who has the courage to understand and review things independently and take a stand against authority, then they’re more than prepared. It depends what Britain you’re talking about."

The six Schools Mazahirul Uloom School, Jamiatul Ummah, Ebrahim academy, London East Academy, Al Mizan primary, and East London Islamic School are all based in the East London borough of Tower Hamlets, which has a large population of Muslims from a mainly Bangladeshi background.

Tower Hamlets council said that they had no authority over independent schools.

In a statement on Friday, the council said: "We have repeatedly offered this assistance to independent schools locally but we cannot compel them to accept this help.

"We can - and we do - intervene when individual safeguarding issues are raised. We robustly act to the limit of our powers."

"We are of course happy to discuss with Ofsted and the Department for Education what role we can play within existing legislation to improve the safeguarding practices at these schools," it said.

The schools are potentially at risk of being closed down if changes are not made.