Officers were alerted to reports of a loud bang and smoke in Tipton near Birmingham shortly after 1 p.m. The immediate area was evacuated. 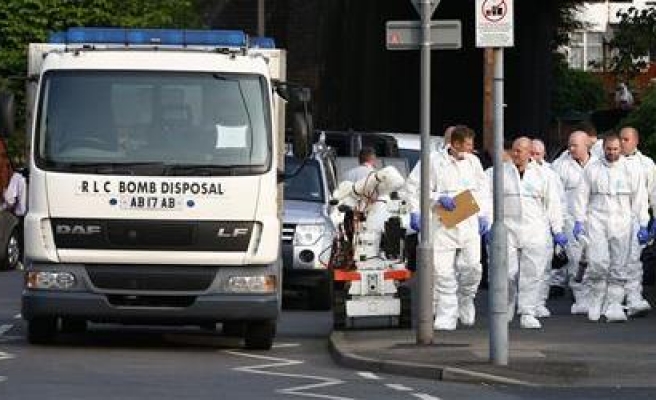 British police said on Friday they were investigating a suspected nail bomb attack on a mosque in central England and were treating the incident as a suspected terrorist act.

Officers were alerted to reports of a loud bang and smoke in Tipton near Birmingham shortly after 1 p.m. No injuries were reported, but the immediate area was evacuated as army bomb disposal experts carried out a search, West Midlands police said.

Assistant Chief Constable Gareth Cann said they discovered the nails behind the mosque.

"All of those things together make the most likely conclusion at this point that there was some sort of explosion that scattered those nails and that someone who did this looked to cause serious harm," Cann told reporters.

"All of that taken together leads to have a working assumption ... that this is possibly an act of terrorism."

The incident came on the same day as the funeral of soldier Lee Rigby, whose murder on a south London street in May stoked community tensions. Two suspects face a murder trial in November.

Birmingham is home to a large Muslim population but local member of parliament Andrew Bailey said relations in his area were very good.

He said he believed an improvised nail bomb had been placed on the railway lines behind the mosque and exploded when people would normally have been at prayer.

"The fact that they altered the time of the prayer was very fortunate and has meant nobody was injured," he said.

Police have said there has been a rise in the number of attacks on Muslims.

The English Defence League (EDL), a right-wing group, has staged protests at which its supporters chanted slogans such as "Muslim killers off our streets".

A mosque was burned down in London and "EDL" scrawled on the side of the building, but it was unclear who caused the fire.

The EDL is planning to hold a rally in Birmingham next week. Last month a number of men from the city were jailed for plotting to attack an EDL rally using a homemade nail bomb.

"Today has been a difficult day for our country with the funeral of Drummer Lee Rigby taking place in Bury and this attack against Muslims and our mosques," said Mohammed Shafiq, chief executive of the Ramadhan Foundation which works to promote understanding between communities.
"Like we will not let terrorism divide us when Lee Rigby was killed, we will not allow these thugs and terrorists to divide Muslims from wider society."