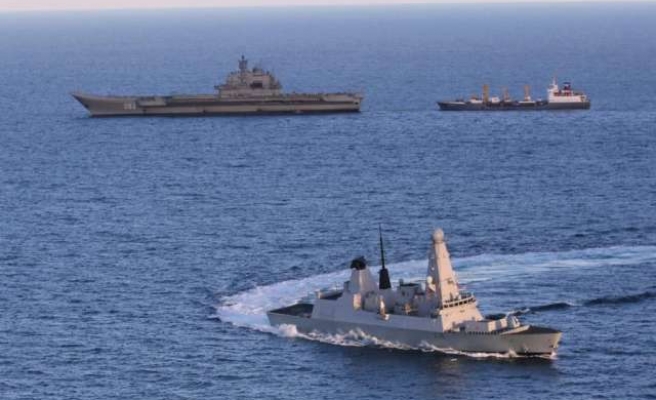 Britain has deployed a destroyer to track an unusually large Russian naval task force transiting the English Channel, it said on Thursday and also noted a "resurgence" in Russian air activity close to its airspace.

The Ministry of Defence said the decision to despatch HMS Dragon, one of Britain's newest and most sophisticated ships, to track the Russian naval force was routine and that the Russians had notified it of their transit plans in advance.

"What is different here is that a Russian task group of this size has not passed by our shores in some time," Captain Rex Cox, HMS Dragon's commanding officer, said in a statement.

Diplomatic relations between Russia and the West have been strained by the crisis in Ukraine, which has revived memories of the Cold War when the military forces of Western Europe were ranged against those of the Soviet Union.

The task force included Russia's only aircraft carrier, the Admiral Kuznetsov, the Ministry of Defence said, as well as a nuclear-powered battle cruiser, a landing support ship, three tankers and a tug.

A Russian naval spokesman said last month that the Kuznetsov had completed a deployment in the Mediterranean and was on its way back to its base of Severomorsk in northwest Russia.

Defence Secretary Philip Hammond played down the deployment of HMS Dragon, which was despatched in similar circumstances last month to shadow another Russian warship.

But when asked by Reuters whether he had noticed an increase in Russian military activity around Britain, he said he had.

"We have over the last few years seen a resurgence in Russian air activity," he told reporters at a lunch in parliament, saying the amount of long-range flying the Russians were doing close to Britain was on the increase.

"That's a reflection of something which a lot of people have missed or have chosen to miss which is that Russia has been investing very substantially for many years in renewing its fleets, in rebuilding its military capability," said Hammond.

Britain scrambled Typhoon fighter jets last month to see off Russian military planes flying close to its airspace off the coast of Scotland, one of a number of such incidents.