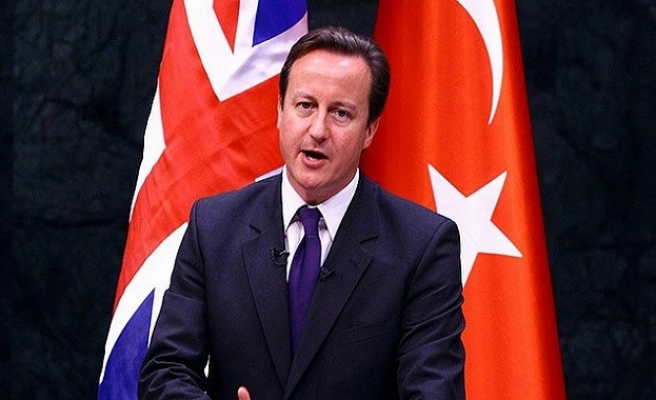 However, Britain would not be part of any European scheme to relax visa regulations for Turkish nationals, he added. Britain and Ireland are not members of the border-free Schengen agreement that encompasses most of Europe.

“I can confirm that the British government’s policy has not changed,” he said in response to a question from former Cabinet minister Kenneth Clarke about support for Turkey's EU membership.

Turkey's further integration into the EU and its 28-year bid to become a member have been highlighted by the refugee crisis facing Europe and the EU’s need to enlist Turkish help in stemming the flow of refugees.

Cameron added: “More than 2 million refugees, almost nine out of 10¸ have stayed in Turkey, and everything that we can do to help the Turks to keep those refugees - perhaps allowing more of them to work and to play an economic part in Turkey - will obviously help in this crisis.

“I think it fair to say that, although the Turks have done extraordinary work in looking after refugees - their refugee camps are some of the best anywhere in the world - we all need to help them to do more to stop people taking off from western Turkey into the waters of the Mediterranean, because that is a journey on which so many have died.”

In response to an earlier question from Labour leader Jeremy Corbyn, Cameron said the details of an EU aid package worth 3 billion euros ($3.4 billion) announced last week had not yet been concluded.

“Obviously we want Turkey to do even more to make sure that people don't get on to dangerous dinghies and launch themselves into the Mediterranean and that's what the recent discussions have been about,” the prime minister said.

Meanwhile, Greek Cypriot Foreign Minister Ioannis Kasoulides said Monday his country would not consent to re-open chapters 23 and 24 for Turkey's accession to the EU.

Speaking to public broadcaster ERT, he said: “At this moment - and this will depend on the course of the Cyprus issue in the coming months - chapters 23 and 24 cannot be opened because the reasons for which they were frozen have not been abolished.”

These chapters of EU law concern the judiciary and fundamental rights and justice, freedom and security. Turkey, which applied for EU membership in 1987 with talks beginning in 2005, must successfully complete negotiations on 33 of 35 chapters to join the 28-nation bloc. Fourteen chapters have been opened so far while 17 remain blocked.

Chapters 23 and 24 have been blocked by EU member Greek Cypriot administration since 2009 due to Ankara's refusal to comply with an agreement on the accession of Cyprus to the EU.

Merkel said Germany was ready to open discussions about economic and monetary policy as the EU prepares to open the chapters on fundamental rights and justice later this year.