UK to use foreign aid to pay for housing Syrian refugees 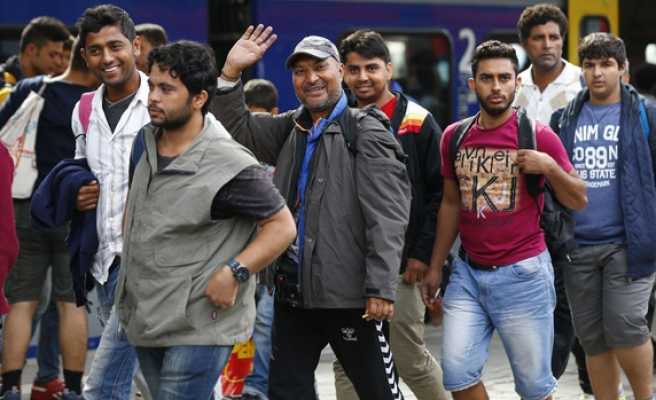 Britain will use part of its foreign aid budget to help meet the costs of accommodating refugees arriving from Syria, its finance minister said on Sunday, in a bid to head off public concerns over the impact on local services.

Prime Minister David Cameron said on Friday that Britain would welcome "thousands more" Syrian refugees, after an outpouring of emotion over the image of a Syrian toddler lying dead on a Turkish beach put him under pressure to act.

Cameron had previously refused to commit Britain to taking in more refugees in response to a surge in numbers reaching Europe.

On Sunday, finance minister George Osborne said that Britain would use part of its foreign aid budget, equivalent to 0.7 percent of gross domestic product, to help local authorities meet the costs of helping new arrivals.

"The foreign aid we have ... can provide the support in the first year for these refugees, could help the local councils with things like housing costs," Osborne told the BBC.

Cameron did not say how many refugees would be welcomed, but a U.N. refugee agency spokeswoman said Britain would take in 4,000 Syrian refugees.

Britain has taken in only 216 Syrian refugees under a U.N.-backed relocation scheme since the start of the civil war in Syria in 2011. About 5,000 other Syrians who have made their own way to Britain have been granted asylum.

This is far below the numbers some other EU countries have taken in. Germany expects to receive 800,000 refugees this year and Chancellor Angela Merkel has said her country can cope with a record influx of refugees this year without raising taxes.

In contrast, Osborne said that instead of being part of a proposed quota system to allocate refugees between EU nations, Britain saw the ultimate solution as deterring people from making the journey to Europe.

He also hinted that Britain could spend more of its 12 billion pounds ($18 billion) aid budget on looking after refugees in countries neighboring Syria.

Britain's center-right government is keen to avoid fuelling debate over immigration ahead of a referendum on whether the country stays in the EU, due by the end of 2017.

Many voters believe being part of the bloc means Britain does not have full control over its own borders. Cameron, who is aiming to renegotiate Britain's terms of membership, argues it is in the country's interest to remain within a reformed EU.

A Survation poll for the Mail on Sunday newspaper showed a slender majority of Britons now favor leaving the EU and a "significant minority" of voters who want to remain in the bloc would consider changing their minds should Europe's migration crisis worsen.

Osborne also reiterated on Sunday that the government would not bring a vote to parliament over possible aerial bombardments of ISIL fighters in Syria unless it could guarantee opposition support.

The Sunday Times newspaper said Cameron wanted to hold a vote in parliament in early October, quoting senior officials. There is uncertainty over the stance of the opposition Labour Party which is currently electing a new leader.