Ukraine ceasefire deal talks may be held on Dec. 9

Poroshenko said the latest round of talks would focus on agreeing a schedule for the implementation of the terms of the protocol, including the creation of a non-militarised buffer zone 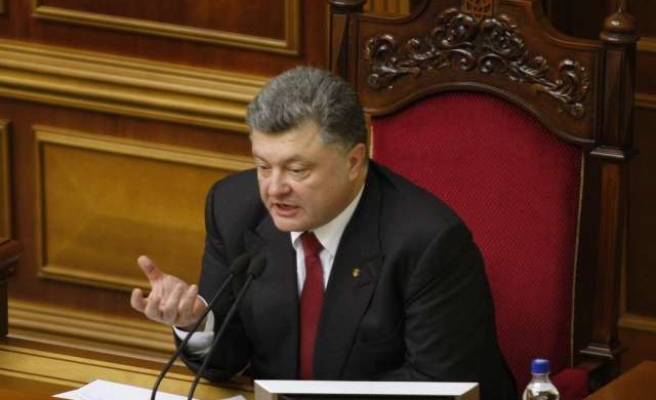 Ukrainian President Petro Poroshenko said on Saturday a preliminary agreement had been reached to hold talks in Minsk on Dec. 9 on implementing the steps of a September ceasefire deal with eastern separatists, Interfax reported.

Clashes in east Ukraine, where Russian-backed separatist rebels are fighting Kiev government troops, have continued despite the signing of the ceasefire deal three months ago, and the death toll has risen to more than 4,300 since mid-April.

"So far a preliminary agreement has been reached that a meeting in Minsk will take place on the ninth of December," news agency Interfax Ukraine quoted Poroshenko as saying.

Representatives of Ukraine, the pro-Russian separatist leadership, Russia and the OSCE security watchdog held talks in the Belarussian capital on Sept. 5 which led to Kiev and rebels agreeing a 12-point peace plan, the Minsk protocol.

Poroshenko said the latest round of talks would focus on agreeing a schedule for the implementation of the terms of the protocol, including the creation of a non-militarised buffer zone, from which the two sides will withdraw artillery and other heavy military equipment.

The proposed date of Dec. 9 coincides with a promised "Day of Silence," when both Ukraine and separatists, who have repeatedly accused the other side of violating the terms of the of the September ceasefire, have pledged to observe a truce.

According to UN data an average of 13 soldiers, rebels, and civilians have died every day since the ceasefire was formally agreed.