Tymoshenko has refused repeatedly to cooperate with judge Rodion Kireyev and denounced him as a "puppet" of President Viktor Yanukovich, her political opponent. 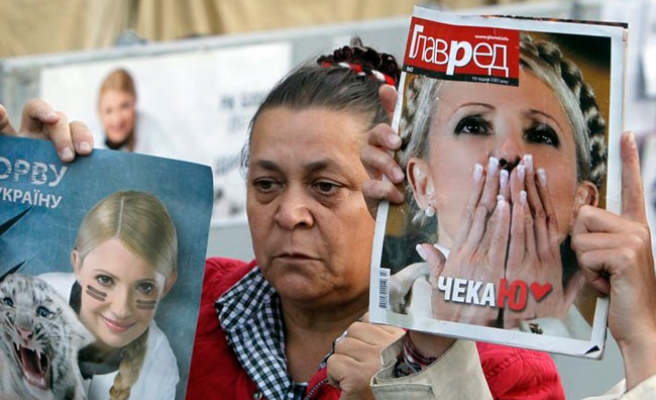 A judge rejected on Monday requests by former Ukrainian Prime Minister Yulia Tymoshenko's lawyers to free her from police detention during her trial on a charge of abuse of office.

Since the trial began at the end of June, Tymoshenko has refused repeatedly to cooperate with judge Rodion Kireyev and denounced him as a "puppet" of President Viktor Yanukovich, her political opponent. She was placed in police detention last Friday for contempt of court.

Kireyev handed down his ruling on Monday as thousands of Tymoshenko's supporters gathered outside the courtroom on Kiev's main thoroughfare, calling for her release. He later rejected a second similar plea from her lawyers.

The 50-year-old Tymoshenko, who brought thousands on to the streets during the 2004 "Orange Revolution" protests, remains an iconic figure for many in parts of the ex-Soviet republic.

Her detention prompted criticism from the United States, an important backer for Kiev, which is drawing on a multi-billion dollar International Monetary Fund credit arrangement.

Adding to European Union criticism of her detention, Washington said in a statement that the ruling reinforced the impression that Tymoshenko's trial was politically-motivated.

Since losing narrowly to Yanukovich in a presidential election in February 2010, Tymoshenko has failed to rally other opposition leaders around her. But, with her trademark peasant hair braid and combative style, she remains the most powerful opposition figure in Ukraine.

Her supporters and parliamentary allies have set up a tent encampment near the courthouse to show solidarity with her in scenes reminiscent of the 2004 "Orange" protests, though the numbers of people are much smaller.

To avoid inflaming her supporters, police brought Tymoshenko to the Kiev courthouse in an armoured police van early on Monday morning, about four hours before the hearing began.

Hundreds of red-bereted special forces waited in vans in streets nearby but made no move to break up the pro-Tymoshenko rally near the courthouse.

She had lost none of her fire for spending a weekend in prison. "You know that I am not guilty of anything. I will not stand up for you," she told the judge when told to rise in court on Monday.

Tymoshenko's supporters reacted sharply to news that she would continue to spend the night in police custody.

"We have exhausted all political mechanisms. From now on, our future action will be carried out on the square," said Tymoshenko bloc deputy Serhiy Sobolev, meaning street protests would continue.

"It doesn't matter what the judge decides. We will keep on pressing for her release, as many times as it takes," said Serhiy Vlashenko, another parliamentary ally.

Despite Western criticism of the handling of the Tymoshenko trial, it does not seem likely to endanger financial aid from the IMF which is strictly linked to economic reform including raising gas prices.

But it could slow talks between the EU and Ukraine aimed at strengthening bilateral ties with the eventual goal of forming a free trade zone.

Though Western governments have expressed concern that the trial looks like a vendetta, they put pressure on her to accept defeat by Yanukovich in February 2010 and have not shown much sympathy since over her protracted row with Yanukovich.

The abuse of office charge against her relates to the signing of a gas supply contract with Russia in 2009 while she was prime minister.

She denies charges by Ukrainian prosecutors that she coerced state energy company Naftogaz into agreeing to a deal with Russia's Gazprom that was ultimately against the national interest.