Ukraine currency in limbo after central bank bans most trade

With the central bank banning nearly all commercial currency trading, the value of Ukraines currency is dropping rapidly. 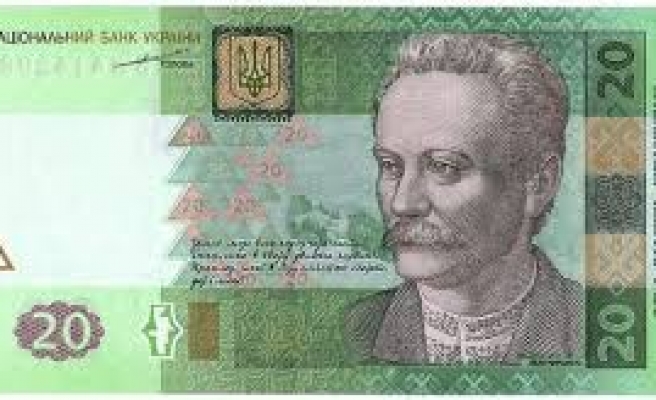 The value of Ukraine's free-falling hryvnia was in limbo on Wednesday after the central bank banned nearly all commercial currency trading until the end of the week, a decision denounced by the prime minister as bad for the economy.

Hours after imposing the ban, the central bank offered to buy dollars for 21.7 hryvnias, meaning anyone forced to sell would receive a third less than the last recorded market rate before the ban, and around half the rate available on the street. Exporters in Ukraine are required to sell 75 percent of their hard currency income.

After later emergency talks with Prime Minister Arseny Yatseniuk, Finance Minister Natalia Yaresko and central bank chief Valerii Gontareva, President Petro Poroshenko's office announced a package of measures had been prepared to stabilise the currency. No details were immediately given. A news conference was called for 5:00 pm (1900 GMT).

The bank said the ban on all trades between banks on behalf of their clients had been imposed to stabilise the currency due to "unfounded" demand from clients.

But Prime Minister Yatseniuk said it would have a "very complicated and negative effect on the economy ofUkraine, the balance of the financial system and the currency exchange rate".

He accused the bank of taking its decision without consulting the government, telling a cabinet meeting he had found out about it on the Internet.

The measure was taken a day after the hryvnia plunged 11.1 percent, shrugging off trading controls imposed by the bank at the start of the week.

War in the east of the country has made it difficult to stabilise an economy on the verge of bankruptcy. The hryvnia has already lost more than half its value so far this year after halving during all of 2014.

With nearly all trading banned, the bank's public figures, based on official volumes in the hundreds of thousands of dollars, gave little clue as to the true value of a currency normally traded in the hundreds of millions each day.

After recording no trades at all before noon, the central bank recorded 12 official trades totalling $420,000 by 3 pm. The average rate of those tiny trades was recorded as 23.81 hryvnia to the dollar. Tuesday's close, the last market rate before the ban, was 31.63.

Professional currency traders were divided on the wisdom of the trading ban, with some saying it could help stop panic and others saying it could make the situation worse by storing up demand for dollars that would overwhelm the currency later.

"So, they have halted trade until the end of the week. What happens then? Will the situation really improve? Where is the demand for currency going to go?" said a currency trader at one bank, speaking on condition of anonymity required by the employer. "On the contrary, it will just build up and will speed up the fall of the hryvnia next week."

But another said: "The central bank needs to give a signal that this is just temporary, to beat back the panicked pace when the hryvnia was falling by five hrynvia a day. This is what all society is demanding the central bank should do. So they've done it."

Exchange kiosks in Kiev, permitted to buy up to 3,000 hryvnias from members of the public, were offering dollars for 39 hryvnias, around 20 percent worse than rates advertised in the windows of commercial banks where dollars were simply unavailable.

A construction worker exchanging dollars at a kiosk in a grocery shop in return for a bag filled with thousands of hryvnia, laughed and told shoppers: "Soon we will have to walk around with suitcases for cash, like in the 1990s."

There were no queues. A cashier at one central Kiev exchange booth said people were buying and selling only small amounts "when they really need to" because of the very high rates.