Poroshenko, standing at Kiev's airport in light rain with his back to the presidential plane he was to have boarded for Turkey, referred specifically to the worsening military situation near Amvrosiyivka and Starobesheve 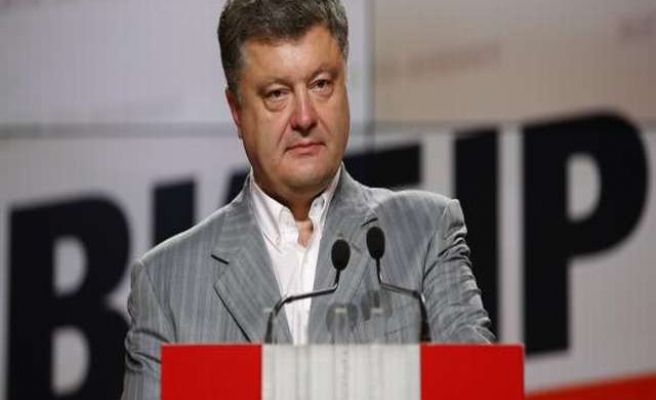 Ukrainian President Petro Poroshenko said on Thursday that Russian forces and entered his country and the military conflict was worsening after Russian-backed separatists swept into a key town in the east and threatened other areas.

He said he was cancelling a trip to Turkey "as Russian troops have actually been brought into Ukraine."

Earlier, a combined force of Russian forces and separatists moved into Novoazovsk, which has been under pressure from them for two days. They now had the potential to threaten Mariupol, a port city further along the Sea of Azov coast.

"A counter-offensive by Russian troops and separatist units is continuing in south-east Ukraine," Ukraine's defence and security council said in a post on Twitter.

It said Ukrainian government forces had withdrawn from Novoazovsk "to save their lives" and were now reinforcing defences in Mariupol, which has been under government control for several weeks after being briefly under rebel control early in the five-month conflict.

The council said Russian forces and separatists were combining to launch a counter-offensive on Ilovaysk and Shakhtarsk, east of the big city of Donetsk.

Poroshenko, standing at Kiev's airport in light rain with his back to the presidential plane he was to have boarded for Turkey, referred specifically to the worsening military situation near Amvrosiyivka and Starobesheve, east of Donetsk.

Earlier, a military source said the separatist forces had also taken Savur-Mohyla, a hill east of Donetsk which gives strategic command over large areas of the territory.

The sudden reverses for the Ukrainian military appeared to confirm the arrival of Russian forces to support the separatists, who have in recent weeks been under pressure from government forces in their strongholds of Donetsk and Luhansk, the east's two main cities.

"There is military equipment in Novoazovsk which came across the border two days ago from Russia," a fighter, from the so-called Azov battalion, which supports the Ukrainian army, told Reuters by telephone.

"The equipment is carrying the flags of the DNR (Donetsk People's Republic) rebels but they are regular Russian forces," said the fighter who did not wish to be identified by name, said.

Separately, a resident of the town on the Sea of Azov, who would only give his first name of Mykola, said: "The authorities in the town are DNR ones. Tanks are moving here and there out on the highway, but there is no fighting going on for the town."

Novoazovsk has been under pressure for the past two days from an armoured column which the Ukrainians say came in across the border from Russia and headed south towards the Sea of Azov.

The loss of Novoazovsk, which was confirmed unofficially by a Kiev military source who did not want to be named, is a blow to government forces.

If Mariupol were to fall to Russian-backed forces, they would have the potential to thrust north to reinforce separatist rebels who have been hemmed in in Donetsk by government forces for weeks.

The U.S. ambassador to Kiev, Geoffrey Pyatt, said in a Tweet: "Russian supplied tanks, armored vehicles, artillery and multiple rocket launchers have been insufficient to defeat Ukraine' armed forces. So now an increasing number of Russian troops are intervening directly in fighting on Ukrainian territory.

"Russia has also sent its newest air defense systems including the SA-22 into eastern Ukraine & is now directly involved in the fighting," he said.