Sunday's heady mix of patriotism and militarism appeared to underscore a new confidence in the Ukrainian leadership that the war was going their way. 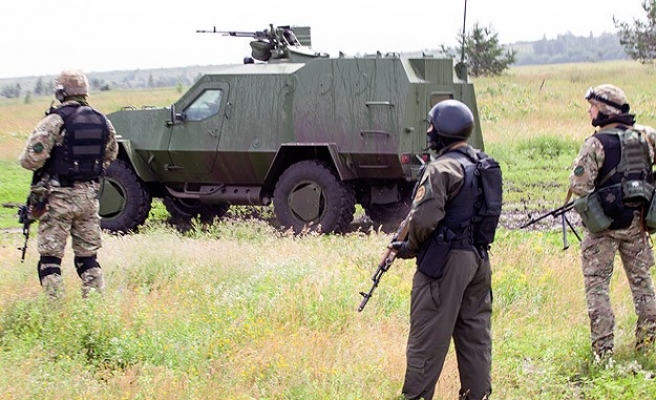 Ukraine marked its independence day on Sunday with a military march past in Kiev intended to send a message of defiance to Russia, but pro-Moscow rebels countered by parading captured Ukrainian troops through the streets in their stronghold.

The rival events showed the divide that will need to be bridged if a compromise on Ukraine is to be reached on Tuesday when Russian President Vladimir Putin meets his Ukrainian counterpart for the first time in months.

Ukrainian forces are trying to snuff out a pro-Moscow separatist rebellion in the east of the country, and on Sunday intense artillery fire could be heard around the rebel stronghold of Donetsk.

In Kiev's Independence Square - scene of the protests that pushed out a Moscow-backed president and precipitated the crisis - Ukrainian President Petro Poroshenko reviewed columns of men and armoured vehicles.

Some of the troops in the march-past were, Poroshenko said, shortly heading to the front line in eastern Ukraine.

In a defiant and emotional speech, Poroshenko said his country was fighting "a war against external aggression, for Ukraine, for its freedom, for its people, for independence." That was directed at Moscow, which Kiev alleges is behind the rebellion.

"It is clear that in the foreseeable future, unfortunately, a constant military threat will hang over Ukraine. And we need to learn not only to live with this, but also to be always prepared to defend the independence of our country."

Poroshenko announced about $3 billion would be spent on re-equipping the army in 2015-2017. Ukraine's armed forces are only a fraction of the size of those in Russia.

Kiev and its Western allies say Moscow has responded to advances by government forces by funnelling weapons and men clandestinely into eastern Ukraine to shore up the struggling rebellion, an allegation that Moscow denies.

Diplomats say Tuesday's meeting between Putin and Poroshenko in the Belarussian capital of Minsk is the best chance yet of ending a conflict that has left ties between Russia and the West at their most toxic since the Cold War and sparked sanctions that are hurting economies in Europe and Russia.

In Donetsk, the main separatist stronghold, about a hundred people introduced over a public address system as Ukrainian prisoners of war were marched through the central Lenin Square.

They looked dirty and unshaven, and bowed their heads as they passed. Some had bandaged arms and heads. They were guarded by rebel fighters with guns, their bayonets fixed.

People in the crowd who came to watch the parade shouted "fascists!" and "killers!" Some people threw bottles at the prisoners. Two street-cleaning machines followed the column, spraying water on to the street in a theatrical gesture to indicate that the men were unclean.

Earlier on Sunday, artillery shells rained down on central Donetsk, hitting the grounds of one of the city's biggest hospitals. Authorities in Kiev deny targeting civilian areas.

Once the sound of shelling receded from the city centre, Donetsk residents strolled through Lenin square looking at a display of captured Ukrainian military hardware.

Rebel fighters armed with Kalashnikovs milled around the event, nervously eyeing the distance where artillery fire was audible.

"This is no independence day, this is a plague on our land, the fascists who have taken control of Kiev who are now shooting at hospitals and morgues," said Grigory, 71, a pensioner who left the nearby city of Torez during fighting.

Alexander Zakharchenko, prime minister of the self-proclaimed rebel entity, said his forces had launched a counter-attack.

He told the parade they were fighting to take the town on Olenivka, about 20 km (12 miles) south of Donetsk, and hoped to capture it by the end of the day.

One rebel, who did not give his name, said: "Today the Ukrainians have got more active, it's their independence day. But we're having a day of independence from them. They're attacking, and we're defending."

The Ukrainian military authorities said they had been making more advances on the battlefield, though the rebel collapse some in Kiev had predicted has not materialised.

A spokesman for the Ukrainian border guard service said there had been several rounds of shelling into Ukraine from Russian artillery units stationed there, echoing similar allegations made by NATO officials.

Russia denies its military is playing any part in the conflict, or that it is giving material help to the rebellion.

It says it wants an urgent ceasefire so help can be brought to civilians in eastern Ukraine, a mainly Russian-speaking region, who it says are being shelled and starved of water, food and power by Ukrainian government forces.

The United Nations says more than 2,000 people have been killed since the conflict erupted in April in Ukraine's mainly Russian-speaking east following Russia's annexation of Crimea. The death toll increased sharply in the past few weeks, as Ukrainian forces went on the offensive.