Ukraine mobilised for war on Sunday, after Russian President Vladimir Putin declared he had the right to invade, creating the biggest confrontation between Moscow and the West since the Cold War. 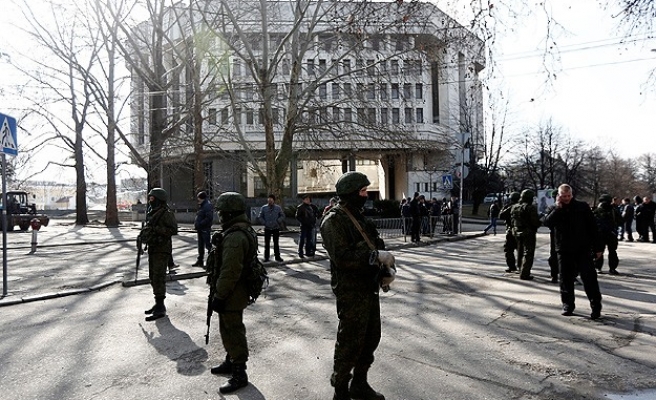 Ukraine withdrew its coast guard vessels from two ports in Crimea and moved them to other Black Sea bases on Sunday, a sign that Russian forces were completing their seizure of the isolated Black Sea peninsula.

In a statement, the border guards said vessels from the Crimean ports of Kerch and Sevastopol had been moved to Odessa and Mariupol. The situation on Ukraine's frontiers was stable apart from in Crimea, the statement said.

Russian President Vladimir Putin has declared he has the right to invade Ukraine to protect Russian citizens. Russian forces have seized Crimea, where they have a naval base at Sevastopol, but have not entered other parts of Ukraine.

Ukraine is calling up all military reserves and must ensure the armed forces are combat-ready as soon as possible, the country's top security official said on Sunday.

Andriy Paruby, Secretary of the Security Council which groups top security and defence chiefs, said an order had also been given to the Foreign Ministry to seek U.S. and British help in guaranteeing the security of Ukraine.

Ukraine’s Foreign Minister Andrii Deshchytsia called on the help of the US, Europe, and NATO to protect Ukrainian territories on Saturday.

Reading out the order after a meeting of the council, Paruby said the Defence Ministry was to "organise and conduct training with the necessary amount of people of military age."

Ukrainians up to the age of 40 are considered of military-age. In the southern region of Crimea, which has an ethnic Russian majority and is home to a Russian naval base, armed groups have taken control of key buildings and installations.

Russia's border guard service said on Sunday some 675,000 Ukrainians had left for Russia in January-February this year and that there were signs of a "humanitarian catastrophe", Russian state news agency Itar-Tass said.

"If 'revolutionary chaos' in Ukraine continues, hundreds of thousands of refugees will flow into bordering Russian regions," Tass quoted the service as saying.

The Ukrainian government made a written request to ask for the help of EU and NATO to protect the country’s territorial integrity and its nuclear power plants, amid rising tension and risk of war.

Russia is threatening peace in European via its military actions in Ukraine and must immediately de-escalate tensions, NATO Secretary General Anders Fogh Rasmussen said on Sunday.

"What Russia is doing now in Ukraine violates the principles of the United Nations charter. It threatens peace and security in Europe," Rasmussen told reporters in Brussels ahead of a meeting of NATO ambassadors.

Rasmussen called on Russia to deescalate tensions and for all parties to "continue all efforts to move away from this dangerous situation".

"It is urgently necessary that all those responsible desist from taking further steps that can only be seen as a provocation," Steinmeier said in a statement.

"Anything else would lead to an escalation with uncertain, possibly dramatic consequences."

Steinmeier also said Russia had no right to deploy its military in Ukrainian sovereign territory beyond the rules of the treaty on the Russian Black Sea fleet.

Turkey’s Foreign Minister Ahmet Davutoglu held a telephone-conference on Saturday with EU Foreign Policy Chief Catherine Ashton, along with other foreign ministers from France, Germany, Japan, Poland, Italy and the UK. The ministers discussed possible solutions to the rising tensions between Ukraine and Kremlin, according to diplomatic sources.

Kerry talked with Ukraine's acting President Oleksandr Turchynov assuring him that the US supports Ukraine. He said that the U.S recognizes and respects Russia's ties to its historical ally Ukraine and its concerns for the treatment of ethnic Russians -- which form a majority in the Crimean peninsula.

"These concerns can and must be addressed in a way that does not violate Ukraine’s sovereignty and territorial integrity, by directly engaging the Government of Ukraine," he said in a press statement.

Russia refused on Saturday to hold direct talks with the Ukrainian government.

"Unless immediate and concrete steps are taken by Russia to de-escalate tensions, the effect on U.S.-Russian relations and on Russia’s international standing will be profound," Kerry added.

The situation in Ukraine's autonomous Crimea escalated on Saturday after Russia’s President Putin asked the Russian Parliament for authorization to intervene in the peninsula, in order to ensure political stability and protection of its Russian ethnic majority. The Parliament issued the authorization in a matter of hours.

Russia’s Parliamentary approval follows the capture of main airports and seaways in Crimea by armed men; they are believed to be members of the Russian navy fleet based in the peninsula.

Ukraine’s anti-government protests began in late November against former president Viktor Yanukovych's refusal to sign an EU trade deal in favor of closer economic ties with Russia. The three-month unrest resulted in the ousting of Yanukovych and the installment of an interim government.

As a result, tensions escalated between Kremlin and Kiev, as protests erupted in the pro-Russian region, Crimea, which refuses the new interim government's legitimacy.

The Ukraine self-appointed "president" has just 7 per cent of the vote, and he thinks he can get the Ukraine army to fight for him? That's almost as much of a joke as the US and UK supporting a violent coup d'etat and then criticising Russia for interfering. Putin must be laughing his socks off at the huffing and puffing of the western clowns and their unelected proxies. If only the west had true statesmen like Putin then maybe the world wouldn't be in so much of a violent mess.