NATO has expanded its cooperation with Ukraine, who hopes to be a full member in 2016, with the signing of new agreements on defense and technical cooperation 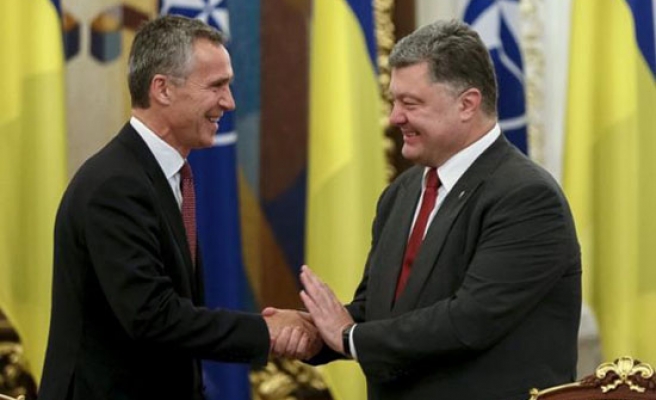 Ukraine reaffirmed its NATO ambitions Tuesday, with Prime Minister Arseniy Yatsenyuk saying he hoped the country would become the organization’s 29th member in 2016.

“A day will come and it will be announced Ukraine is the 29th member of NATO,” Yatsenyuk said during a meeting with NATO Secretary General Jens Stoltenberg in Kiev.

He called for Ukraine’s membership to be approved at next year’s NATO summit in Warsaw.

Stoltenberg promised that NATO would continue to provide Ukraine with “political and practical assistance”. He added: “NATO supports Ukraine's independence, territorial integrity and supports the full implementation of the Minsk agreements.”

The English-language Ukraine Today website reported that Ukraine wants to build its defenses against a nuclear attack.

“We have never asked for offensive weapons,” Yatsenyuk told the meeting. “But we have to defend our country. We must defend peace, tranquility and stability, in Europe as well. We need defense capabilities against nuclear power."

“Russia spent tens of billions of dollars in order to upgrade its army and [is] intimidating today the entire civilized world.”

Under the 1994 Budapest Memorandum, Ukraine agreed to give up its nuclear arsenal in return for international guarantees of its territorial integrity.

New Cooperation Agreements
Ukraine and NATO “are more than partners,” Ukraine’s president said after a number of agreements were signed with the alliance during a visit by NATO’s Secretary General. Moscow criticized the move, saying NATO’s advance on Russia’s border is unwelcome.

On Tuesday, Poroshenko announced that Ukraine and NATO had signed a joint declaration on strengthening defense and technical cooperation, as well as a roadmap for a partnership between Ukraine and NATO on strategic communications. The program is aimed at supporting Kiev in counteracting “Russian propaganda” and informing the society on what’s happening in Ukraine, Interfax reported.