European Union and Ukraine agreed last Friday to delay implementation of the free-trade part of the EU deal until the end of next year in a concession to Russia. 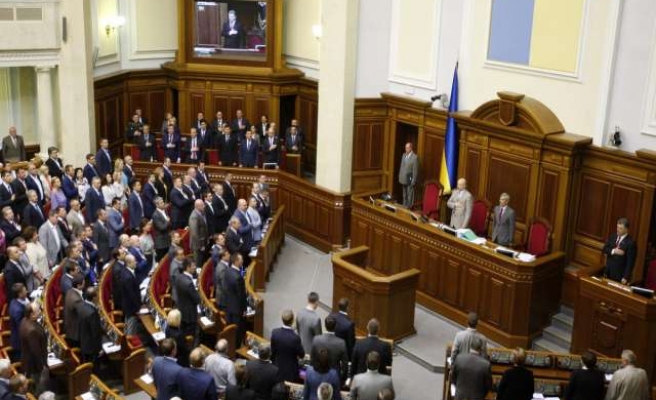 Ukraine's parliament on Tuesday ratified a landmark agreement on political association and trade with the European Union, the rejection of which last November by then President Viktor Yanukovich led to his downfall.

The agreement, whose ratification was synchronised with that of the European Parliament in Strasbourg, won unanimous support from the 355 deputies who took part in the vote.

Referring to the deaths of anti-government protesters who came out against Yanukovich's rejection of the pact with the EU and of soldiers killed in fighting separatists since, President Petro Poroshenko said: "No nation has ever paid such a high price to become Europeans."

Yanukovich's retreat from an avowed course of European integration in favour a closer ties with Ukraine's ex-Soviet master, Russia, triggered months of street protests in which about 100 people were shot dead in the capital Kiev.

After he fled to Russia in February, Moscow denounced the pro-Western "coup" against him and went on to annex Ukraine's Crimean peninsula and subsequently backed armed pro-Russian separatists in their drive for autonomy from Kiev.

The chain of events has provoked the worst crisis between Russia and the West since the Cold War, with the United States and its Western allies imposing sanctions against Moscow, and led to a conflict in eastern Ukraine in which more than 3,000 have been killed.

Despite the sanctions against Moscow, the European Union and Ukraine agreed last Friday to delay implementation of the free-trade part of the EU deal until the end of next year in a concession to Russia.

Russia, which says its economy could be badly hurt by a sudden flood of duty-free EU goods onto its market via Ukraine, had threatened to slap import tariffs on Ukrainian goods from Nov. 1, arguing that the pact would squeeze it out of the Ukrainian market.

Under the ambitious agreement, Ukraine will continue to enjoy privileged access to the EU market until January 1, 2016, but, in a concession by Brussels, it will not have to cut duties on imports from the EU in return.

Kiev had been concerned that allowing EU products more cheaply onto its market could undercut local goods, creating more problems for its weak economy.

Referring to this breathing space, Poroshenko told parliament: "The national economy has got a year and a half to become competitive and ready itself for competition with European markets.

"Thank you Europe for this multi-billion bonus!"

Referring to relations with Moscow, he said: "We withstood this powerful pressure (from Russia) and did not give in to blackmail. In the agreement not a single word or single full stop has been changed."