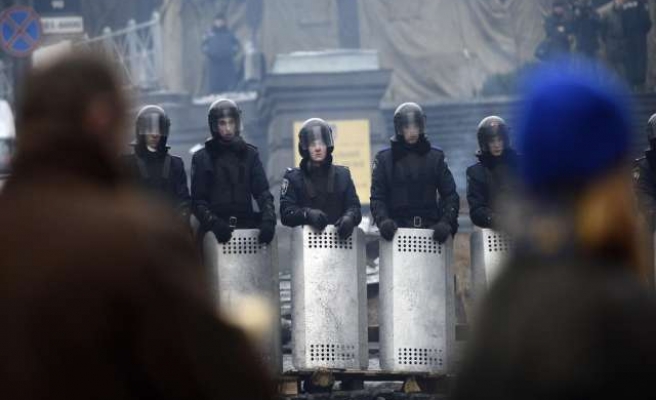 Ukraine's state security service on Sunday placed anti-terrorist units on alert in response to a sharp rise in unspecified threats against sensitive installations including atomic power stations, airports and gas and oil pipelines.

The ex-Soviet republic is in the grip of mass anti-government protests and it was not clear if the unusual statement by Ukraine's SBU service, issued on its website, was connected to the unrest.

Describing the move as preventive, it said: "The SBU's anti-terrorist centre, in accordance with the law, is obliged to put on readiness anti-terrorist units on the territory of the state."

It said international airports, power stations, and railway and bus stations in large cities were particularly at risk.

The new security measures were to be applied to the blocking of approaches to state buildings as well as calls to seize installations where weapons are stored - potentially targeting some of the radical protesters who have been in violent clashes with police.

"The decision was made in accordance with the law of Ukraine on combating terrorism," the SBU said.

"The action carried out by the security services ... is aimed solely at ensuring public safety and stopping criminal activities with a terrorist goal. These measures are transparent and primarily preventive in nature," it said.

Ukrainian President Viktor Yanukovich has warned of rising radicalism and terrorist activities after more than two months of civil unrest in which anti-government protesters have occupied buildings in the capital Kiev and other cities, calling for political reform and Yanukovich's resignation.

A Ukrainian man tried to hijack a passenger plane from Ukraine to Turkey on Friday, making a bomb threat and demanding to go to the Winter Olympics venue of Sochi, Russia, just as the opening ceremony was taking place. He was later arrested by Turkish security forces.