Half of Russian gas exports to Europe cross Ukrainian territory, including parts of the east now in rebel hands. 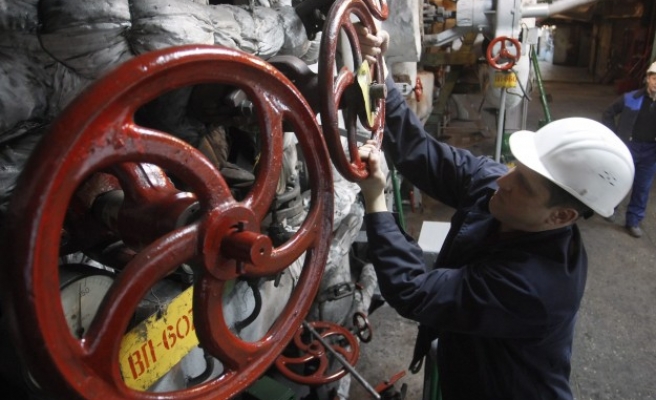 Ukraine's Prime Minister Arseny Yatseniuk on Wednesday branded Russia a "terrorist state" over its actions in eastern Ukraine and reaffirmed Kiev's desire to join the NATO alliance, which will hold a two-day summit this week.

Yatseniuk also told a televised cabinet meeting that pro-Russian separatists were deliberately targeting energy infrastructure in eastern Ukraine and he detailed plans to compensate lost supplies of both natural gas and coal.

His remarks came as spokesmen for Ukrainian President Petro Poroshenko and his Russian counterpart Vladimir Putin said the two had discussed possible peace measures in a telephone call.

The Kiev spokesman said they had agreed on a "permanent ceasefire" in eastern Ukraine's Donbass region, but in Moscow Putin's spokesman denied this because he said Russia itself was not a party to the conflict.

"Russia is a terrorist state, it is an aggressor state and will bear responsibility under international law," Yatseniuk said, using tough rhetoric partly aimed at Ukraine's Western backers before a NATO summit opening in Wales on Thursday.

"Concerning NATO, I consider the most correct decision would be one to accept Ukraine as a member of NATO," Yatseniuk said.

Last week, Yatseniuk announced plans to submit a draft a law in parliament to scrap Ukraine's non-aligned status and steer a course towards NATO membership. The alliance is highly unlikely to admit the impoverished former Soviet republic of 45 million people as a member.

Yatseniuk also said on Wednesday Ukraine was pressing ahead with a project to build what he called a "real state border" between his country and Russia, without elaborating.

Since the collapse of the Soviet Union in 1991, the 2,295 km land border between the two countries has been largely porous, a fact Kiev says has helped fighters and weapons to pass freely from Russia onto its territory.

Russia denies directly helping the rebels, despite what the West and Kiev say is overwhelming evidence to the contrary.

Commenting on his country's energy woes, Yatseniuk said Ukraine needed to buy some 25 billion cubic metres of natural gas to meet its annual needs. Russia cut off its exports to Ukraine in July in a dispute over pricing.

"The Russian bandits and terrorists are deliberately destroying the energy system of Ukraine, knowing that restoring it will cost billions," he said.

"Russian mercenaries have begun actions which may lead to the destruction of the gas transit system on the temporarily occupied territory (of eastern Ukraine)," the council's press service said in a statement.

"This may pose a threat to supplies of gas to Europe."

Half of Russian gas exports to Europe cross Ukrainian territory, including parts of the east now in rebel hands.

Yatseniuk announced Ukraine would buy one million tonnes of coal from South Africa because the conflict has disrupted domestic production in its Donbass region, home to much of the country's heavy industry and many coal mines.

"They (the rebels) bombed our main coal mines," he said.

Ukraine relies on coal-fired power plants to generate about 40 percent of its electricity.

According to the United Nations, the war, in which pro-Russian separatists are fighting to throw off rule from Kiev, has killed more than 2,600 people and driven nearly a million from their homes in eastern Ukraine.