'If you ask me if an exchange is possible I would tell you 'yes' for the first time, using my constitutional right,' Petro Poroshenko says 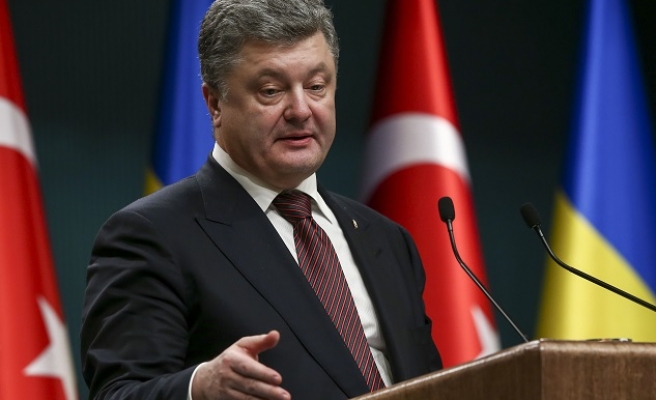 Ukrainian President Petro Poroshenko on Wednesday said he was ready to exchange prisoners with Russia to secure the release of Ukrainian pilot Nadiya Savchenko, who has gone on hunger strike to protest her detention and trial in Russia.

Savchenko, a military helicopter pilot, stands accused over the killing two Russian journalists in shelling in eastern Ukraine in 2014. She denies the allegations and both the European Union and the United States have called for her immediate release.

"If you ask me if an exchange is possible I would tell you 'yes' for the first time, using my constitutional right," Poroshenko told reporters in Ankara after holding talks with Turkish President Recep Tayyip Erdogan.

But he added that Russia had until now not come up with "any satisfactory initiative" to arrange such a swap, according to remarks translated into Turkish.

Poroshenko earlier described the trial against the 34-year-old pilot as "a farce" being conducted in a "kangaroo court".

Savchenko is seen by her compatriots as a symbol of resistance against the Kremlin, accused of fuelling the conflict in eastern Ukraine which has claimed more than 9,000 lives since April 2014.

Savchenko, an Iraq war veteran, began her hunger strike on March 3, refusing both food and water.

In a defiant final address to the court on Wednesday, she vowed to continue her protest action and raised her middle finger at the judge.

Prosecutors are seeking a 23-year jail sentence. They argue that she was involved in the shelling in her capacity as a volunteer in a Ukrainian battalion.

But Savchenko says she was kidnapped even before the attack and smuggled across the border into Russia.